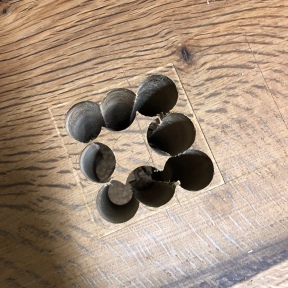 Boring the waste is a lot less effort than chopping a 3 pouce square mortise! While I was in a boring frame of mind after last week’s blog post, I bored out the waste for the planing stop mortise, using the same WoodOwl ship’s auger in my North Bros brace as I had for the holdfast holes. With 8 holes bored round the perimeter of the mortise, the middle portion of waste lifted out easily. The second feature of the holdfast drilling jig then came into play – the 90 degree face providing a useful surface to register the 1 1/2″ timber framing chisel on when paring the mortise flush without any undercutting. 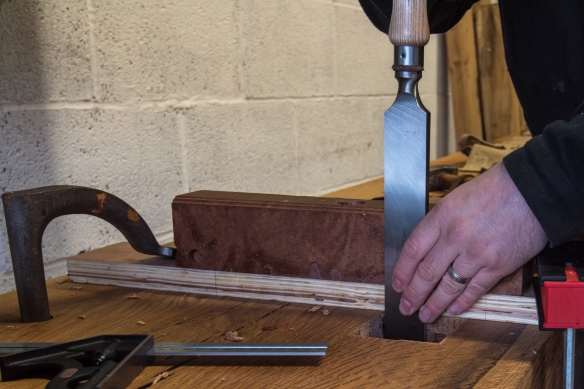 Paring the mortise flush with a timber framing chisel

The planing stop needs to be friction fit in the mortise, so that it can be easily adjusted with a mallet, and not so tight that is splits the bench top. Having a consistently sized mortise will make fitting the planing stop a lot easier, and also a lot less prone to seizing up (I hope). So some effort getting a clean mortise is definitely time well spent. I started by paring the to end grain surfaces perpendicular to the top of the bench, followed by the long grain sides. This sequence of work ensured that chopping the waste from the long grain would not result in a split in the bench top. I cut the mortise entirely from the top, as flipping a completely assembled Roubo bench sounded a lot like work. There was some minor blowout on the underside, but nothing any one will see, and certainly nothing that will impact on the integrity of the slab. 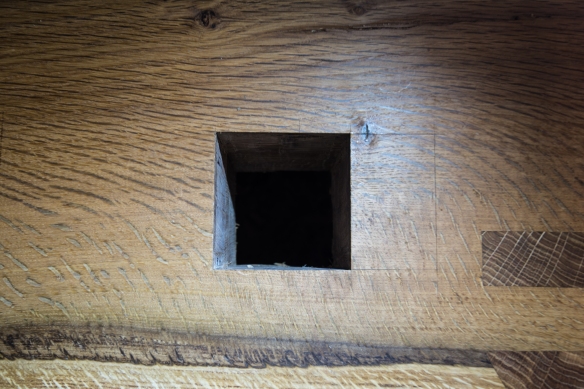 A square and true mortise

Once the mortise walls were pared clean I did a final sweep round the corners, which is invariably where junk collects. I did allow some slight undercutting in the corners, as the substantial sides and ends of the mortise will provide the gripping power on the planing stop, and relieving the corners ensures a good fit without reducing the necessary friction. 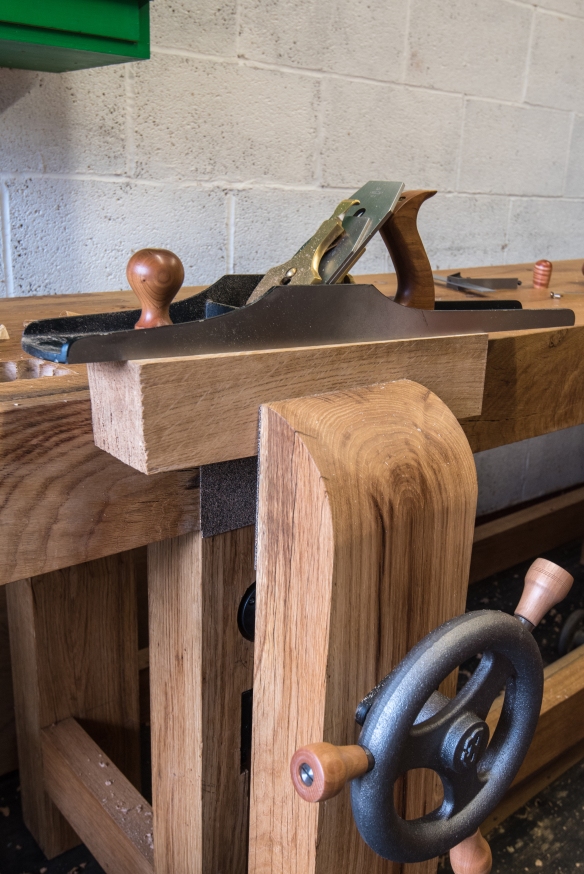 With a clean and plumb mortise, I started work on the planing stop itself. This was the first opportunity I’ve had to use the Benchcrafted Glide C vise since I installed it in the bench, and I was not disappointed – it combines sweet and smooth movement with a tenacious grip. Processing the planing stop in the vise with the big Lie-Nielsen No8 was a rock solid experience, and I’m looking forward to spending the rest of my life working with this vise hardware. Processing the planing stop was pretty usual fare – I trued up two perpendicular faces, testing for a 90 degree angle with the Vesper 4″ square, and then worked the remaining two faces from the reference surfaces. I left the planing stop a hair oversize at this stage so that I can bring it down to final dimension while I am doing the final fitting. 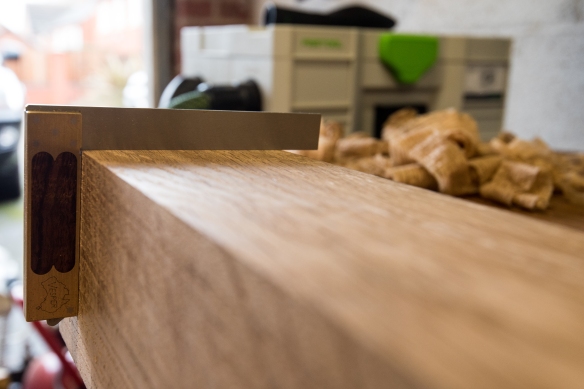