As regular readers will know, whenever I travel I always pay attention to the furniture in my accomodation. We have just returned from our annual family break in the Cotswolds, and the traditional cottages we often stay in have over the years provided some interesting furniture pieces to examine. This year’s trip was no exception, and in the corner of our bedroom I found an intriguing chair. When I first saw this chair, I started wondering  where it had come from. An elegant joint to the two arms, and a very stylised comb, all cut out of solid wood

The chair features an arm bow cut from solid wood rather than steam bent, and which terminates in pleasing rounded hand holds. The large comb was also cut from solid. The joint between the two halves of the arm is a neat way of hiding the shrinkage of an end grain butt joint (an issue you can find on antique Welsh stick chairs). The front pair of spindles have been wedged through the arm, and the legs are wedged in the seat. The rest of the spindles are fitted to blind mortises in the arm. The seat has been saddled quite lightly, and has developed a pronounced amount of wind at the front. The seat was warped considerably

At first I thought that this chair was possibly user made as, the turnings aside, it had a rugged vernacular feel. However, turning the chair over revealed a maker’s mark stamp for J Elliott & Son. A google search identified that J Elliott & Son were a High Wycombe chairmaking firm, and this chair appears to be a “Smokers Bow Armchair“. Previously I’ve only encountered the use of solid sawn arms and a doubler in Welsh stick chairs – this is often a feature that is said to typify and distinguish Welsh stick chairs from other chair making traditions. In reality, I expect that many vernacular chair making traditions would have relied on using curved timber in preference to steam bending parts, and there was a lot about this chair that wasn’t Welsh. 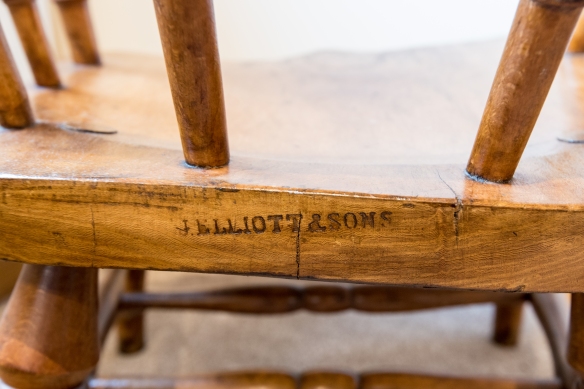 Of course, I couldn’t resist trying the chair out, and was delighted to find that it was very comfortable, with a healthy slope backwards which encouraged you to recline into the chair. Yes, the turnings might seem a bit heavy for contemporary tastes, but despite (or perhaps because of?) the warped seat and failing joint between the comb and arm bow, I found this to be a charming little chair. 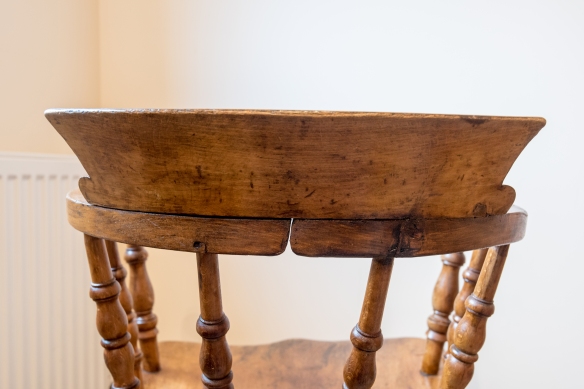 The joint between the comb and the arms has separated over the years, although the comb still feels solid 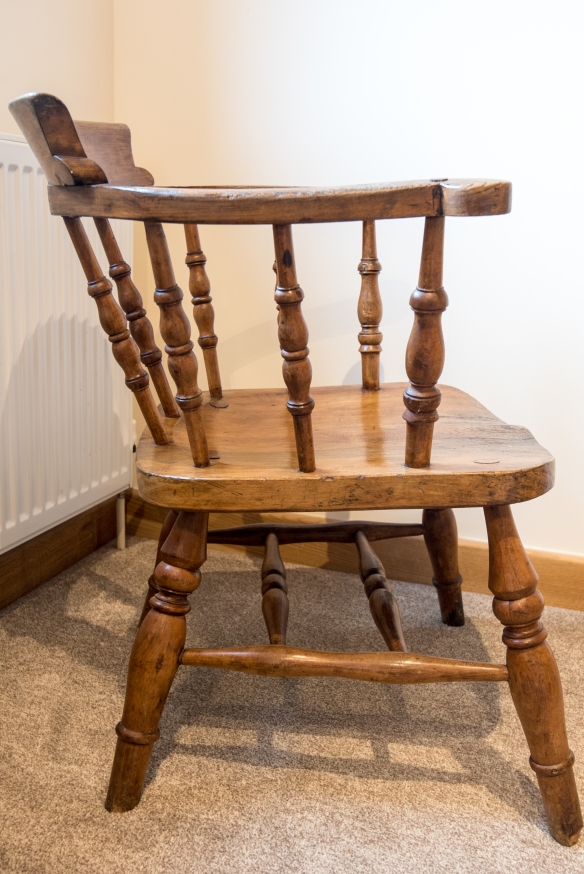