Transferring the joinery to the slab top

If I’m being honest, cutting the joinery in the slab top is the element of the bench build that has me feeling the most apprehensive. I’m going to look at these joints everytime I stand at my bench, so I want them to be good. The scale of the slab (currently 5 3/4″ thick, with the top surface still to be flattened) also adds an additional concern – this is big joinery, and the accuracy with which the joinery is layed out and cut will determine how well the bench goes together. No pressure then.

To transfer the joinery from the legs to the slab I once again called upon the assistance of my slab moving team, and we put the slab upside down on my existing workbench, and assembled the undercarriage (also upside down) on top of the slab. Each leg was clamped to the slab and then checked for square against the slab in front/back and side-to-side directions. This invariably involved some repositioning and adjusting until all four legs were flush to their respective edges of the bench top, and perpendicular to the slab on all sides. Once the legs were properly positioned, I transferred the joinery using an unhandled marking knife by Hock Tools. I keep this marking knife in my chisel roll for leveling chair and table legs, and marking tasks where I need the whole knife to be flush to a component (where the handle of my other marking knives would foul the line). It worked perfectly for this application, and left a good clear line which I then filled with 0.2mm pencil for increased visibility.

The mortises are a little over 5/4″ wide, and to hog out the waste I used a 1″ diameter WoodOwl ship’s auger in my North Bros brace. The increased length (18″) of the ship’s auger makes it easier to keep perpendicular to the workpiece, and I also clamped a guide block with a 90 degree face to the bench top as a visual aid, along with my 10″ Vesper square. WoodOwl bits cut very cleanly, and if you are careful there is no spelching on the exit side of the hole. This meant I was able to bore all the way through the bench top in one go, rather than going half way and then flipping the workpiece over (I try to minimise the number of times the slab is moved, as I have to call on my slab moving team each time). Drilling through the slab meant that chips were able to fall through to the floor as I pared the mortise, which meant I did not have to stop and periodically clear the mortise of debris. I bored five holes in each mortise, which removed the majority of the waste. I then knocked out the webbing from both sides of the mortise using a chisel. When removing this material, efficiency is key, and I find that making a relief cut with the chisel in the centre of the webbing, then cutting each side, gives the chip a route to pop out. The majority of the webbing was cut from the top of the mortise, but I did kneel under the bench top to remove some from the underside to avoid spelching. Once the webbing was removed, I pared the mortises back to the baseline, checking for square as I went. Despite being a deeper through mortise, the process is very much the same as I wrote about for mortising the legs. The main difference is that I did not pare to the full depth from one side. Instead, I pared to roughly 4 1/2″ deep, (leaving 1 1/4″ left to go) and will finish cutting the mortise from the opposite side. This will prevent blowing out the grain on the exit side, and also ensures that the mortise is plumb throughout.

The timber framing chisel, against my regular Blue Spruce chisel for scale. And two completed mortises

I have approached this build with the intention of using only the furniture-making tools already in my tool chest. However for this stage of the build I did add a timber framing chisel to my tool kit, because of the significant depth of the mortises (which would have all but swallowed my existing chisels). The 1 1/5″ wide timber framing chisel is a monster, with a 10 1/2″ long blade. Not only is the extra length very useful for cutting deep mortises, but the additional weight means that it is very efficient at paring mortise walls, as the chisel effectively drops into the cut, especially when used in conjunction with a guide block. This specialist tool was a very worthwhile investment, even if it won’t get used very often.

The slab has been rotated and my next task is to cut the remaining elements of the mortises, before moving on to the dovetail sockets. The slab has been flipped over, ready to finish cutting the mortises. It has taken a few weeks since my return from Kentucky to get back into the workshop in earnest, but I am now back at the bench. After being spoiled by a week working at the Lost Art Press store front (which has the most amazing natural light, and an embarrassment of workbenches) my own workshop feels very modest indeed. But it is good to be home. Chopping the mortises in the vise chop for the hardware

I decided to kick-off my return to the Roubo bench build by fitting the hardware – this was a nice discreet step in the process before I start cutting the joinery in the slab top. I’ve had the Benchcrafted Glide C vise and Crisscross Retro since the slab arrived in August 2018, and I also added a Benchcrafted swing away seat and pair of Crucible holdfasts to complete fitting out the bench. Having used the Crucible holdfasts at the LAP storefront, I can confirm that they do indeed hold like the dickens. I bored three holes in the front right-hand leg of the workbench partially as a place to store the holdfasts, and also to facilitate using the holdfasts to slamp long boards in place while edge jointing. These holes were bored with a 1″ diameter, 18″ long WoodOwl ship’s auger bit driven by my early 1920’s North Bros brace. the extra length of the ship’s auger assists in keeping the hole perfectly perpendicular to the surface of the workpiece, which is essential if the holdfast is to work correctly. The swingout seat is attached to the same leg, and positioned so that the top of the seat will be 19″ from the floor. To attach the seat mechanism to the bench I ordered some (frankly gorgeous) square headed 1/2″ diameter bolts from blacksmithbolt.com. 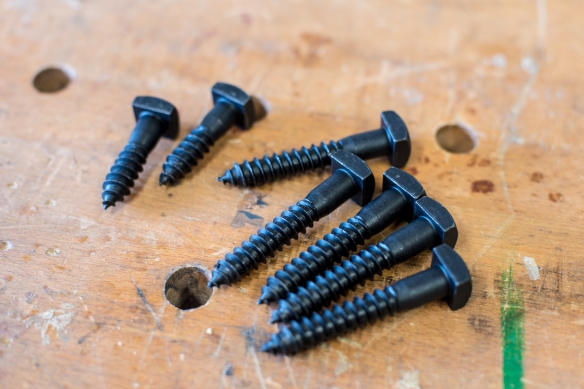 Quality hardware is a must on major projects, and these bolts are gorgeous

Most of the work with this stage of the build came with fitting the vise hardware. Benchcrafted have produced some incredibly detailed and clear instructions for installing their hardware, so there is nothing to be gained from recounting the steps necessary. A few people have asked which iteration of the Crisscross mechanism I selected, and I went with the Retro (rather than the “Solo”) because I figured that the stepped mortises would be more straight forward than drilling the pin holes (which must be dead nuts accurate) through over 6″ thick oak. Chopping the mortises in the left-hand leg and vise chop did involve a fair amount of chisel work, but was not that difficult, even if I did use some particularly gnarly oak for the vise chop. To make like easier I hogged out most of the waste with a forstner bit and then cleaned up with a chisel.

Fitting the hardware is quite involved, but an enjoyable process. There are definitely some new skills to be learned from this process, including tapping threads in timber to allow for the use of machine screws – this was entirely new to me, but thanks to the very clear instructions it went smoothly. After completing the installation I couldn’t help but do a test spin of the vise, and was pleased to find that it moves just as sweetly as advertised, and grips tightly. Once the bench is assembled I will trim the top of the chop level with the bench top and finish shaping it. 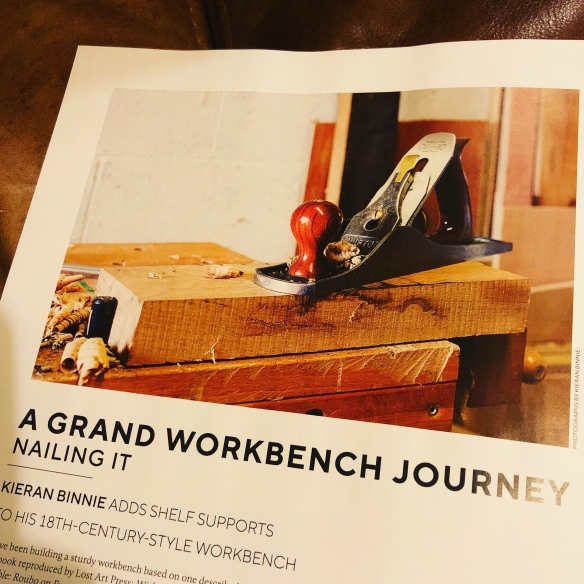 Issue 289 of the new-look Furniture & Cabinetmaking is now in stores, and includes the next instalment of my Roubo bench series. This instalment introduces using cut nails and “Roman” nails in furniture making, along with tongue and groove joinery and beading planes (the gateway drug to moulding planes!).

Issue 7 of Mortise & Tenon is now out in the world (my copy arrived yesterday). It is a real honour to see my article on vernacular Welsh woodwork alongside articles by Bill Pavlak, Richard Arnold and George Walker (to name but a few of the authors featured in this issue).

I’m back in the ‘shop and work has resumed on the Roubo workbench. But before I get back to an update on the bench build, here’s a collection of photos from my trip with Megan, Mark and Jeff to Pleasant Hill Shaker community in Kentucky. Hewing marks still on the beams 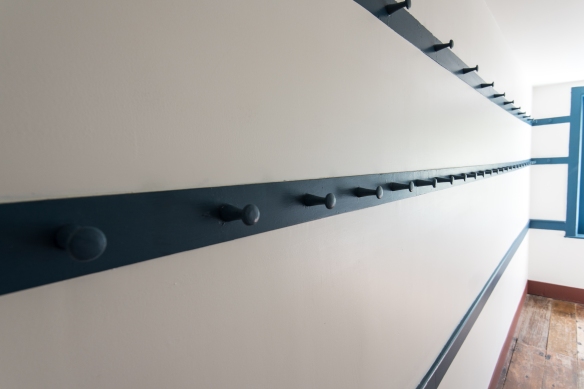 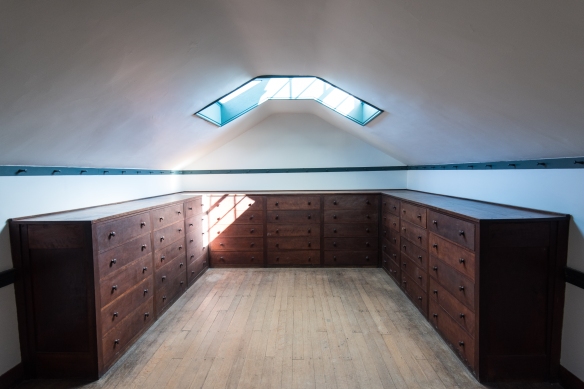 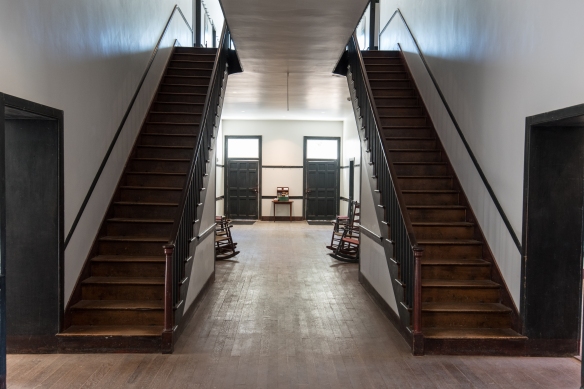 Separate staircases for men and women.

I love the patina and wear on this door catch 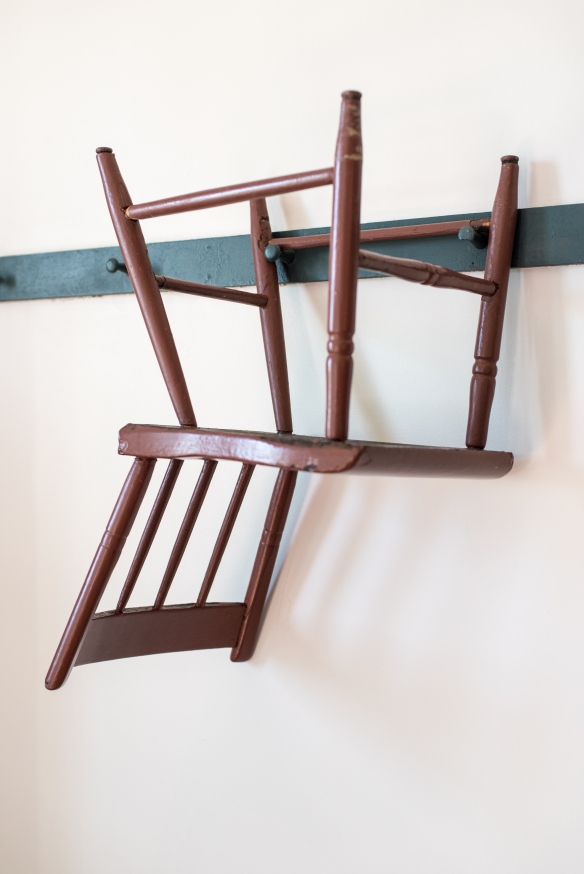 Hanging a chair on pegs