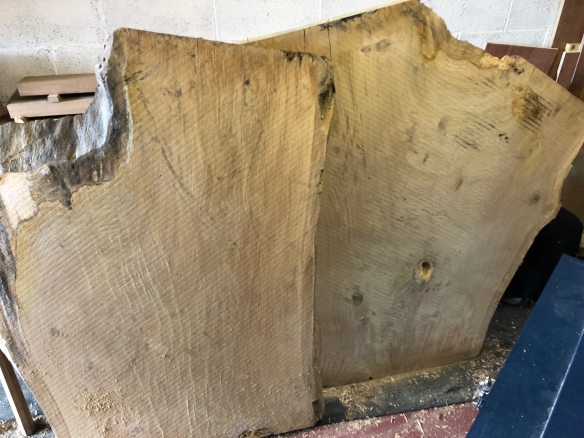 Two very large oak slabs, waiting to be turned into something useful

I’ve had two large oak slabs sitting in the corner of the workshop since January – the product of a fruitful research trip last autumn to Whitney Sawmills and St Fagans. The slabs are 50″ x 45″ and 2″ thick, and take up a monstrous amount of space, so I’ve been biding my time to cut them down into usable sizes and reclaim some much needed floor area. After several evenings of cutting mortises for the Roubo bench, I felt it was time for a couple of hours doing something different, and decided to breakdown the slabs. As I’m planning on doing a full dry-fit of the Roubo undercarriage soon, having some clear space in which to assemble the legs and stretchers will definitely make like easier. The first thing I do whenever I break down rough stock is work out how to efficiently harvest the parts I need, along with any useful spares. This was no different, although the size of the slabs did present a few different challenges. The oak was purchased for a special project I’ll be starting work on very soon (more about that soon), but I also knew that I’d have plenty of spare left over for other things. So, having marked out the critical components I needed for the main project, I reviewed what spare material I had. 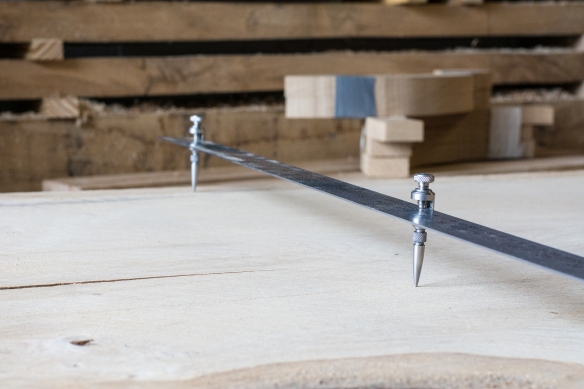 As can be seen from the photos, the slabs are roughly “Y” shaped, from where the trunk had forked in two directions. The right-hand stem of one slab had been whispering suggestions of being turned into a two-seater Welsh stick chair. As a project, that really appeals particularly given the gentle concave curve to the edge of the slab which would work nicely as the front of the seat, and I can shape the rear edge to match. That focus on letting the material dictate the proportions and form of the chair is something which early Welsh stick chairs really emphasised. To make sure I had enough material available for the seat I rigged up a pair of trammel points to a long ruler, and traced along the edge of the slab to establish where the rear of the seat would fall. 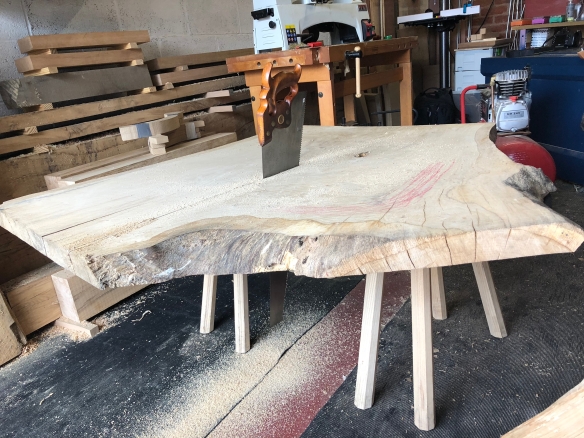 The slabs were large and heavy enough to require rolling around the workshop instead of carrying. That being said, placing a slab on my pair of staked saw benches was rock solid while sawing. I ripped the settee parts off one slab, as well as the components for the main project off both slabs, using the Disston D8. The slab was still reasonably wet (24%) which meant that sawing it by hand was not as heavy going as it would have been if the timber was dry. The remaining sections were then crosscut to size, and stickered to dry out a little more before I bring them into the house. 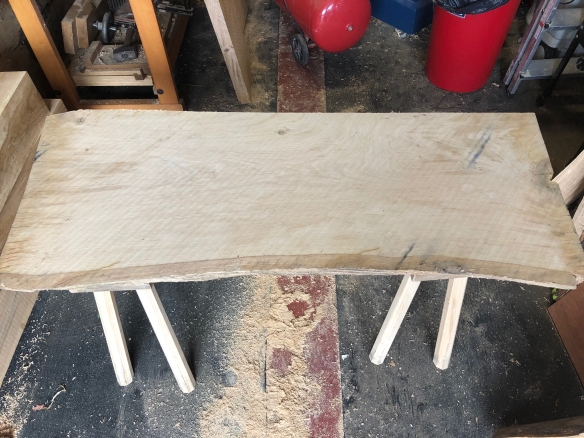 The settee seat blank. The back edge will ultimately be curved to match the front.