Finishing the Boot Bench was a straight forward process which I was able to attend to between festivities over the Christmas break.

Before applying any milk paint I sealed two knots (one on the top, and one on the right hand side) with a thin coat of shellac. That was followed by five thin coats of Bayberry Green milk paint by Old Fashioned Milk Paint, applied with a foam brush. I tend to mix milk paint using a 2:1 ratio of warm water to powder. This creates a much thinner mixture than the manufacturer’s instructions, which call for a 1:1 ratio. The result is a thin paint which requires more coats to get an even coverage, but which does not obscure the underlying detail or require as much work to remove the chalky texture. As you can see from the gallery below, the paint took a few coats to build up a nice density of colour. Once the fifth coat had dried I burnished all of the paint using a pad of brown paper – this smoothed out the texture and also eased the few remaining variations in colour. 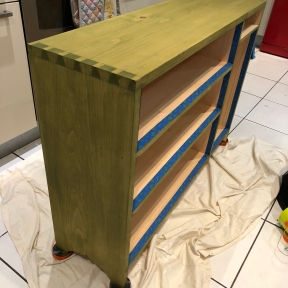 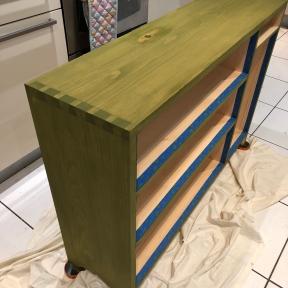 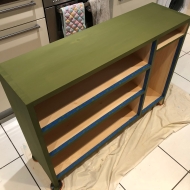 I then removed all of the blue tape and was pleased to see that there had been very little colour bleed on the edges of the shelves. I gently chamfered the leading edge of each shelf with a spokeshave to protect the fragile corners from years of use, and this also removed what little colour bleed there was, resulting in a crisp paint line. At the same time, I flipped the case upside down (using a moving blanket to protect the finished surfaces) and chamfered the feet using a 9 grain Aurio rasp. The Apprentice helped me layout the chamfers with a pencil gauge, and also took some swipes with the rasp. She’s really enjoyed helping out on this project, and so some more father-daughter ‘shop time will hopefully be on the cards soon.

The Apprentice helped me chamfer the feet

I then padded on two coats of Osmo Polyx to the interior and exterior of the Boot Bench. Osmo is a hardwearing and waterproof oil finish, which makes it perfect for this application. The oil gave a soft lustre to the milk painted surfaces, and deepened the colour a little. It also emphasised the underlying details, such as the end grain texture and lines of the dovetails, which is wonderful as I wanted to be able to see the joinery through the paint. 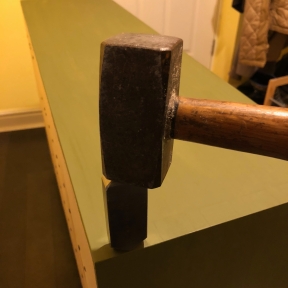 Once the Osmo had dried the finishing touches were to knock in the nails pinning the dados, and to apply my maker’s mark to the end grain on one of the tails. There really is nothing like introducing a 2lb lumb hammer to a project you’ve finished… And then, on New Year’s Day the Apprentice helped me load shoes onto the shelves. The Boot Bench has been in use for just shy of a week now, and has had a transformative effect on our hall – easily accomodating all of the shoes which used to spill out of the previous rack, and making the space much more welcoming. I need to finish making the drawer, and then this project will be done. More on the drawer next time.