One of the furniture styles I first connected with when I started thinking about building furniture in addition to guitars was campaign furniture. I’d read Chris’ blog posts about campaign furniture and my interest was piqued sufficiently to pre-order his book in 2014. It arrived just before the Easter weekend, and I spent the bank holiday reading it cover to cover. Campaign furniture is still one of my favourite furniture forms, and there are several reasons why it speaks to me. The first is the combination of utility and style. I tend not to find flashy furniture pieces all that appealing, and the clean lines of campaign furniture accented with brass pulls and corner brackets fits well with my tastes. Then there is the emphasis on functionality – these are rugged pieces designed to be broken down into manageable packages and easily transported. If only I’d had a set of campaign furniture during my student and itinerant early career years.

Laying out octagons the easy way

And so, furniture from the British Empire, and particularly that associated with military service, has a family resonance. Which is all very well and good, but what exactly does this have to with woodwork? Well, I shall explain. For the past two years we have throw a garden party for the Apprentice’s birthday. We don’t have much in the way of garden seating, and when I was re-organising my woodstore at the end of the saw cabinet build, I realised that I had enough stock for a couple of the folding campaign stools out of Chris’ Campaign Furniture book. This is a probject that has been on my to-do list ever since I read the book, and with the Apprentice’s next birthday only a couple of months away this seemed like the perfect opportunity. Reviewing the available stock I realised I had enough material for four sets of stool legs – one set in each of ash and maple, and two in sapele. This will give me plenty of practice at the lathe (another reason why this project appeals). Finally, a quick project can be a nice palate cleanser after a major build. 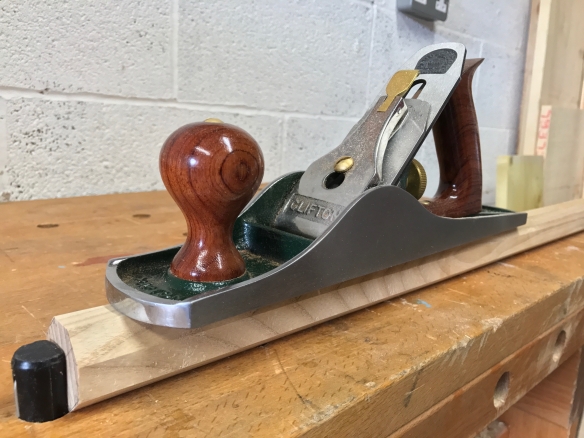 Octagonalisation is a campaign that will never end

After six-squaring the stock, I decided to octagonalise it before turning it to round. More experienced turners than me will no doubt be able to go from square to round without any intermediary steps, but while I’m still becoming familiar with the lathe I figure that anything which reduces the risk of a catch while turning is worth taking. I marked out the octagons using the same pre-industrial geometry I always do, before planing the corners away with my Clifton No.5. All told, octagonalising 12 legs took only a couple of hours (running at an average of 10 minutes per leg plus layout time). Next is to make a story stick for the leg pattern, and then turn the legs. I’m hoping for three usable stools – I’m realistic that turning 12 perfectly consistent legs might be a big ask for a baby-turner (but who knows, I might get lucky). I have one burgandy leather seat on order from Texas Heritage, and will order more seats (as well as tribolts from Lee Valley for the folding mechanism) once I know how many viable stools I have. In any event, this is going to be a super fun project which will hopefully increase my ability at the lathe, and result in some additional seating for the Apprentice’s guests in August.

Four sets of campaign stool legs ready for the lathe

1 thought on “The octagonalisation campaign continues”