We’re just back from a wonderful, and much needed, week long break to the Cotswolds and so progress on the staked worktable has temporarily slowed. That being said, before we escaped for our trip I managed to octagonalise the first of the legs for the table, and I managed to steal time away in the workshop as soon as we returned home to continue work on the remaining legs.

Octagonalising the legs is the stage of the build I’ve been most looking forward to. Taking leg from a consistent square cross section to a tapered octagon is a fun process, and as I’ve written about before, I really like the aethestic benefits – the increased facets and a significant reduction of the visual weight of the leg without reducing the structural integrity. Actually planing in the octagonal cross section for the work table legs is very much as for the staked saw benches I built last year, although there are a couple of important differences between these legs and the saw bench legs. Firstly, the legs taper in the opposite direction for the work table, with the narrowest point at the floor rather than at the tenon shoulder. Secondly, the tenons for the work table are shaped while the leg is still at a consistent square cross-section, while the saw bench legs were tenoned once they had been octagonalised. What this means in practice is that the process of laying out the octagons is a little different, as I could not rely on the same geometry techniques at the tenon shoulder as I did for the saw benches. 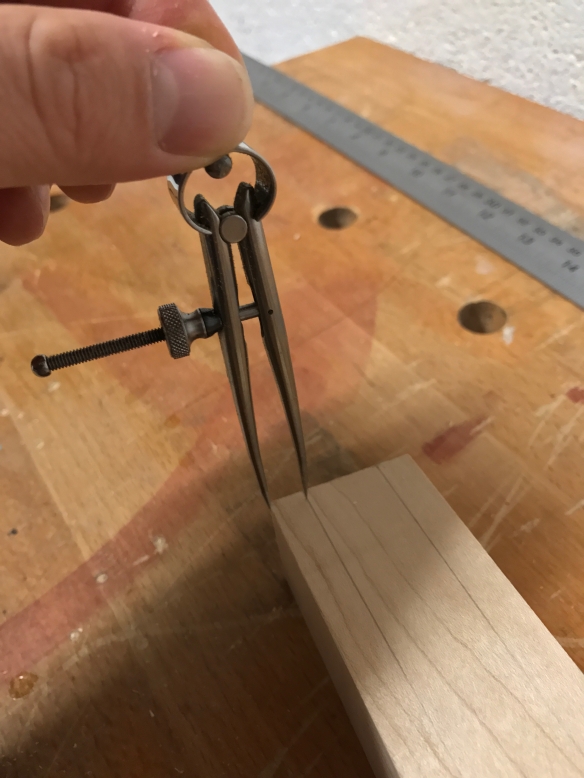 Laying out the octagons with dividers

Chris suggests laying out the octagons by stepping off facets on each face of the tapered square leg with dividers, and so this was the approach I took. At the foot end I still used the same geometry technique as I had for the saw benches as a fail safe. The additional length and amount of taper on the work table legs does require a touch more accuracy when planing the octagons. On the saw benches I was happy to eyeball the consistency of the octagonal facets when planing, as this was plenty accurate for legs of that length and extent of taper. The taper is much more pronounced on the work table legs, and the legs are much longer, and so rather than rely on just eyeball acuracy I marked out the edge of each facet along the length of the legs, and worked to those lines. 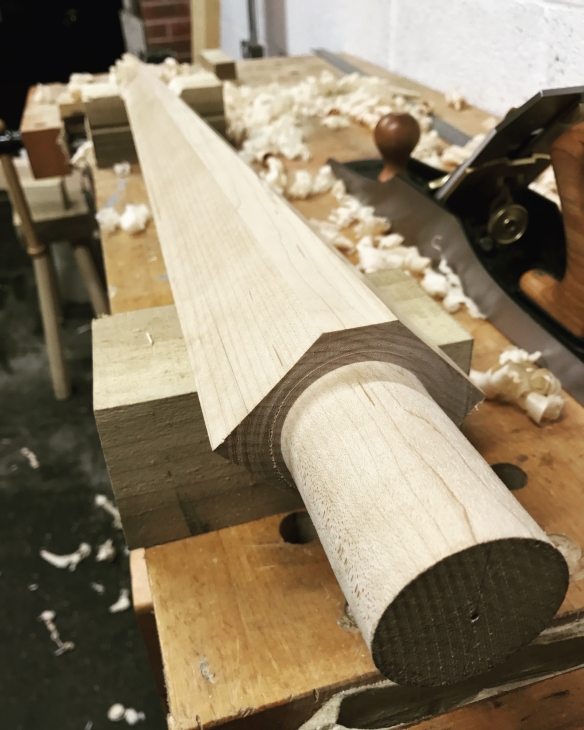 Planing the tapered square leg down to a tapered octagon

I also knocked up a pair of v-blocks to hold the legs while octagonalising. Nothing fancy – just some scrap blocks of poplar, into which a 90 degree “V” was cut with a cross-cut back saw (I used the Bad Axe Bayonet) which took a total of 5 minutes to prepare. These blocks support the leg, which would otherwise need to balance on the tip of a corner while planing the facets. To stop the leg shooting out the end of the blocks, I used a bench dog as a planing stop. This worked well enough, but really it emphasised how much I would benefit from a traditional toothed planing stop to hold work in place – yet another reason why I need to start looking into sourcing a slab of green oak for my Roubo bench.

A pair of v-blocks, and a bench dog, hold the legs in place for octagonalising. On my next bench I will use a toothed planing stop instead of a bench dog.

With the facets laid out, and the leg held in place by the two v-blocks and a well placed bench dog, planing the octagons was very straight forward. I removed the majority of the waste with the No.5  set to a rank cut, and then refined each facet with the No.8 set to a fine cut to ensure the new faces were straight and square. When planing to joint, or to a precise line such a here, I constantly look at the mouth of the plane. Seeing exactly where the plane starts to bite the workpiece, and which part of the iron is producing the shaving, gives a huge amount of feedback and allows for very precise adjustments to plane position and pressure distribution for an accurate cut.

Comparing the octagonalised leg to the original untapered profile, and even to the tapered square profile, it is striking just how much material has been removed and how much more elegant the finished leg is. The maple works really well for octagonalising as it holds details clearly, giving sharp corners between each facet. These legs, when installed, will have a really strong silhouette and an almost architectural quality.

2 thoughts on “Octagonalisation – a way of life, not a process”