As I’ve written about previously, one of the real attractions in building the staked worktable design (in additiona to the fact that it is a very attractive and practical piece of furniture) is the existing skills this build will reinforce, and the new skills sets it will help to unlock. One of the new skill sets to which this build will serve as an introduction is turning. I acquired my Shopsmith machine just over two years ago (and wrote about it here) but until now I’ve not had the opportunity to actually get to grips with the lathe and try my hand at turning. Earlier this year, in anticipation of starting work on the staked work table, I removed the band and table saw attachments, and set up the Shopsmith in it’s lathe configuration. But aside from checking that everything either locked properly or span smoothly, I didn’t have the time to try turning.

Marking the centre point with a centre finder

Today that all changed, when I mounted the table legs in the lathe and turned the 2″ wide, 3″ long, tenons. This is the most dirt simple shape you can turn on the lathe – a straight cylinder. But for that reason I think it made a very good introduction to turning. The legs are thick enough to reduce any diffraction or bending while on the lathe, and the relatively short length of the turning means that you do not have to maintain a consistent diameter over the full length of, say, a chair spindle (although the tenon does need to be a consistent diameter to provide good glue surface for the mortice). So the end result is achievable.

The dividers layout the tenon circumference.

My lathe tool kit is very minimalist at this point. I’m using the Easy Wood Rougher (with plans to add the Easy Wood Finisher and Detailer tools at some point in the future). This choice was informed partly by of Chris’ recommendations, partly because this tool flattens the initial learning curve, and also because a compact set of tools really appeals at this stage. To be honest, this tool is all I needed to turn the table leg tenons, but looking to future projects the Finisher and Detailer will put more profiles and decorative elements within my grasp.

To turn the worktable tenons, I located the centre of each leg (at both ends of the leg) with a centre finder, and also marked a 2″ diameter circle at the tenon end using a pair of dividers, which I then traced over with a fine pencil. The marking gauge Bern Billsberry gave me recently was perfect for marking the shoulder of the tenons, as a dark pencil line is much easier to see than a knife kerf when the lathe is running. It was then a case of mounting the leg in the lathe and carefully removing material along the length of the tenon until I reached the desired diameter. To test the fit of the tenon I used a “go block” – essentially a scrap of oak which I drilled with the same 2″ forstner bit I will use to drill the mortices of the desk, and which was then cut in half to give a semi-circle cutout to test against the tenon. As soon as the go block fits over the tenon, it is time to stop turning. 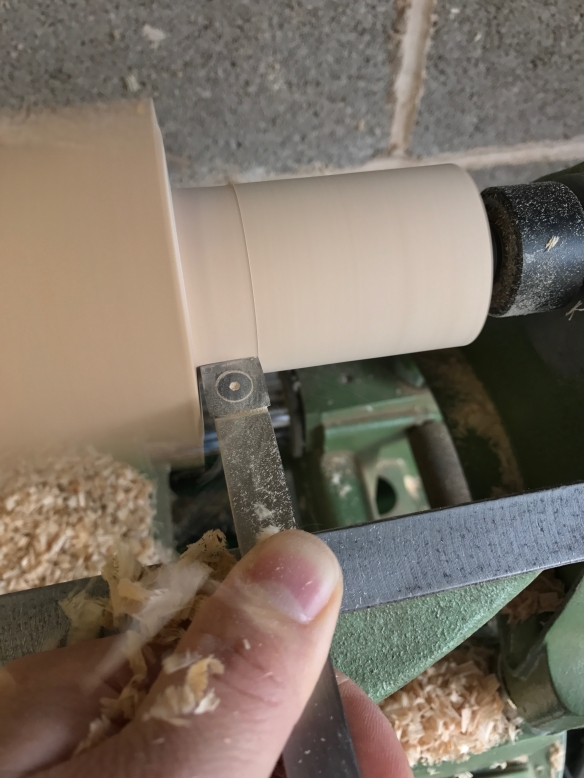 Which is all straight forward. But what that very mechanical description does not convey is the meditative experience of gently wasting away wood (being careful not to catch the corners of the legs) and sneaking up on the final tenon shape. This was one of the most blissful, and addictive, woodworking experiences I have had in ages. I’m not sure why this is. Maybe it is because most of my work involves making stock flat (or octagonal), so the act of shaping it into a cylinder, is entirely new. There is also a focus on posture and body mechanics which feels very similar to time spent on the martial arts mat – turning is all technique and lightness of touch instead of brute force, very much like  my martial arts techniques. Who knows. But once I’d figured out the idiosyncracies of the Shopsmith, turning the four tenons was incredibly relaxing. I need to do more of this. 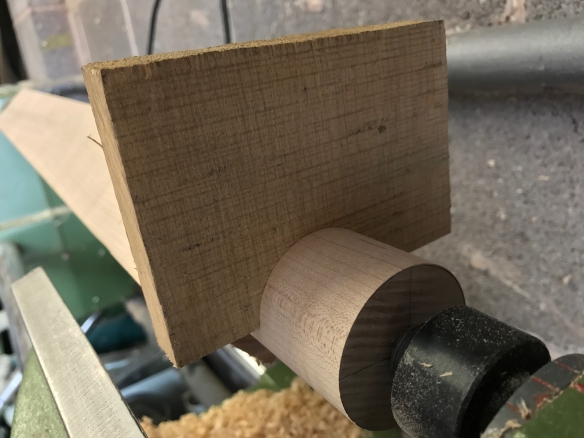 The go block says this tenon is done.

Taking the first steps toward developing a new skill set is always intoxicating – I felt this way the first time I cut a half decent dovetail, or when Clive taught me my first spine dislocation. And there is much to learn. But starting something is always the first hurdle, and today has shown that Roorkee chairs and campaign stools (both using Jason’s excellent leather kits, as can be seen here and here, respectively) and chair spindles are now all achievable. All that is needed is practice. Having the lathe up and running unlocks a list of projects I’ve wanted to build for sometime, and also opens up an entirely new woodcraft to explore – one which adds an entirely new perspective to my work. This couldn’t be more exciting.

Four tenons all turned. Next is to octagonalise the legs.

2 thoughts on “Turning Just to Keep on Turning”