Choosing the best layout for the top

If I’m being perfectly honest, I was a little apprehensive about jointing the boards for the top. At 53″ long this is the longest edge joint I’ve prepared to date, and although an edge joint is one of those simple techniques that every handtool woodworker picks up early on (and one which I’m very comfortable with), the additional length of this joint does increase the difficulty level a little. As the top joints will be visible every time I sit at my desk, I knew I would be haunted by any gaps or poor joints, and the only way to avoid this endless torture would be to work good joints first time round. As I keep saying on this blog, there is no such thing as a “trick” in woodwork – just fundamental techniques practised well and attentively. I should have remembered those words instead of worrying about the difficulty of the joints, because once I was actually at my workbench the process went smoothly and achieving gap free joints was very straight forward. Having confidence in the techniques and following them, is often the perfect antidote to being overawed by the task at hand. But let’s back up a bit and talk about the actual process…

The straight edge shows that the rough edge of this board surves significantly. Stopped cuts will remove the high spots and then the full length can be worked

There are two significant visual features of this desk – the first is the facets and edges that punctuate the silhouette of the desk, and the second is the grain of the top. Placing the three boards in the most attractive combination is therefore critical to creating a pleasing final piece. One of the boards had some lovely subtle quilting, while the other two were much plainer. I decided to place the figured board in the middle, sandwiched between the two plain boards, and this was more attractive (to my eye at least) than a figured board on one side and the two plain boards grouped together.

One joint down, onto the next!

When orientating the boards I also thought about the stability of the top, and mitigating seasonal wood movement – particularly whether the heart side and bark side of the boards should be alternated, or whether it was safe to position all three boards with the heart side facing the same way. My go to source when thinking about wood movement is always With the Grain, which provided some helpful tips but no definite answers. Ultimately, the most attractive orientation was for the boards to be placed bark-side up, with the grain running in the same direction. This will make final clean-up of the table top easy as the whole surface area can be planed in the same direction, and as the battens will restrict wood movement I think this orientation should work just fine. With the position and orientation of the boards decided upon, I struck lines across the edges of each board to help identify which edge paired with which.

The final task before I started jointing the boards was to sharpen my No.8 plane. Yes sharpening is boring, but to get a really clean and precise edge joint, especially in material as hard as maple, needs a sharp iron. I also find preparatory sharpening such as this to be very useful for mentally preparing for the work ahead.

Chris Vesper tells me that for edge checking the blade of the square should be placed against the face of the work for a greater reference surface, and the stock used to check the edge.

When planing an edge joint I first check the board with a straight edge to see if there are any obvious humps or hollows, and also to hold the two edges against each other. These tests quickly identify if there are any trouble spots, and as a result help me to dial in a straight and square edge faster than if I were working blind. The first edge I started working had a significant fall-off at one end, and so I took stopped cuts along the high spot, slowly lengthing out the plane strokes until I had worked the highspot down to the same level as the low corner. Once the edge was on a consistent level (although not perfectly straight of square), I set a fine cut on the plane and started to plane the joint proper. Whenever I plane edge joints I find it helpful to think of planing a concave curve into the workpiece – the long sole of the No.8 prevents this from happening, but aiming for it ensures that pressure is applied correctly and you do not end up with a convex curved edge (which is what a plane naturally wants to do). So, at the start of the cut the pressure is entirely on the toe of the plane, for the middle of the cut the pressure is evenly spready between the toe and heel of the plane, and at the end of the cut the pressure is entirely at the heel of the plane.

Only once the first edge is square and true do I move on to the matting edge, using exactly the same process. Once both edges are jointed, the next task is to set them together and check for any gaps at both the front and back of the joint. If the joint is gap free without needing clamps, then it is good to go. All three boards were over width, and so before gluing up the first assembly I used my panel gauge to mark the final width of the two boards, and ripped the excess with the Disston D8, leaving 1/8″ waste still on the boards to allow for some final clean-up. The excess material ripped off the boards will provide the spindles of the matching staked chair, meaning that the entirety of the chair can now be made from scraps of the table timber!

Ripping the excess with the Disston D8 and staked saw benches

I worked the top in two stages – jointing and gluing the first pair of boards, and then jointing and gluing the third board to the larger panel. Hide glue was used for both joints, and the top is now back in the study ready to be squared and cleaned up. I’m going to leave any further work on the top until after the legs and battens are complete, as there may yet be a spot of seasonal movement in the top, especially after a big glue-up, and I don’t want to remove any more materaial than I have to. One flattening just before the joinery is cut will be enough to get the top ship shape. 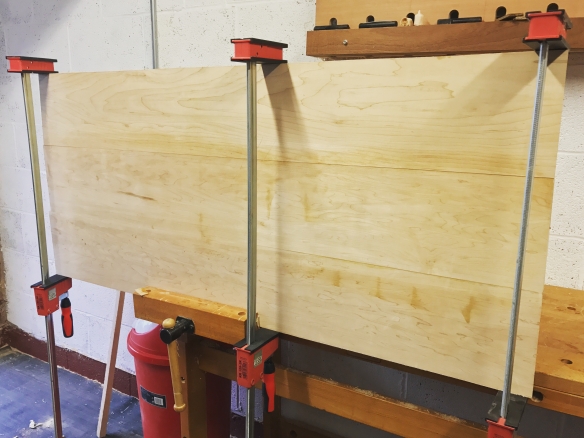 The complete top, glued up and curing.

1 thought on “This just tops it all”