My workshop has felt very empty since the Policeman’s Boot Bench was collected by the client a couple of weeks ago. I was delighted when the client sent me a photo of the Boot Bench in situ, and even more so when he very kindly sent the following (unsolicited) testimonial with the suggestion that I post it on the blog. Long standing readers have had plenty of discussion this year about the Boot Bench from my perspective – now it is time to hear about it from a different vantage point.

As the (now ex-)policeman alluded to in many blog posts on Over The Wireless, I felt bound to exercise my Internet-given right of reply about the build. For anyone thinking of using a craftsman for a specific piece of work, I hope this provides some insight into the experience.As the client, the process has been fascinating, and unexpectedly gratifying. I came to commission this build basically because the furniture market wasn’t giving me what I wanted. Two years ago I bought my own house in a slightly shabby part of the East End of London. I have been doing it up ever since. It’s a Victorian terrace with a long, narrow hallway – an awkward space for storing shoes. For whatever reason, the British furniture market does not do shoe storage very well. You either get horrid IKEA plastic trays for the wall, a monstrous church pew/bookcase hybrid from a ‘posh’ (read: overpriced) retailer, or a flimsy Argos open-frame that achieves an anti-TARDIS effect: taking up egregious amounts of space whilst storing very few shoes. With no good options, I mulled for some months. Then whilst griping to Kieran about the perennial First World problem of unsatisfactory shoe rack choices at his daughter’s first birthday last year, I realised with a start that I was chatting away with a skilled amateur furniture maker. 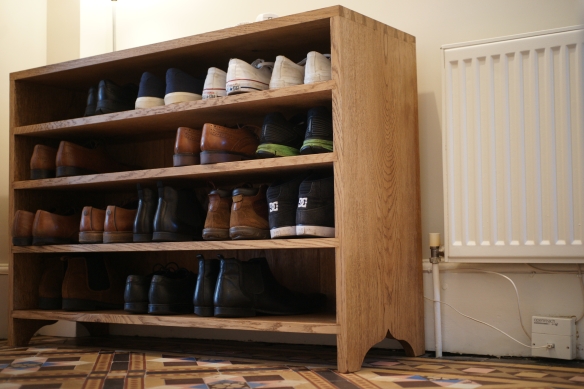 I floated the idea of the build, and a commission was rapidly and enthusiastically agreed. The process was pretty simple. I had in mind, after many months of internet scouring, a rough vision of what I wanted. During September I drew up detailed sketches of front, side and base, including proposed dimensions, and passed them to Kieran. He responded with a request for photos and measurements of the space in which the piece would sit, to help in judging dimensions, materials and finishes – in particular as the boot bench would sit next to a radiator. He then suggested some fairly mild adjustments: less dainty feet, deepening the dimensions to accommodate bigger shoes (such as his own), a shift in style from country kitchen to Arts & Crafts, and the addition of a back panel to protect my hallway wall from scuffs. I was generally satisfied, but asked that the feet lift (to expose my prized encaustic tiled floor). I also rejected a suggestion of decorative nails to secure the shelves, as it was out of keeping with the style of the existing furniture in nearby rooms. The result was an elegant, practical piece that will work in many different settings as I move over the years. From October it was over to Kieran for by far the greater part of the work. Every weekend for the following nine months I had the pleasure of prose and photos describing the latest progress on the build. First came heavy planks of wood, which I had the chance to see in person on a visit in December. These were left to acclimatise to the environmental conditions of the workshop. Then work started in earnest on New Year’s Day, and out of the rough lumber came unexpected geometry: smooth planes and clean lines, neat grooves for the shelves, and lastly sharply toothed dovetails. Kieran kept consulting where needed, such as when I requested a deeper curve to the foot detail for aesthetic reasons.

In February, Kieran sent me out a sample board of waxes and shellacs – unremitting professional that he is. I had seen pictures of the sample board on my phone, and had one choice in mind of black wax and a reddish shellac, which would lend the wood a warm, grainy look.  In hindsight it would have been an error to choose without seeing the samples in person first as I surprised myself with my choice of a black wax and blonde shellac. These coats created a strong contrast, showing off the grain but maintaining the underlying cool tone of the wood. I was also able to visualise properly for the first time how the hallway would hold together visually: invaluable.Spring saw the delicate process of fitting together all those carefully prepared boards, and the transformation from lines on a page to a three-dimensional object. My role in this period mainly consisted of frantically opening each of Kieran’s weekly updates, and thinking of new ways to express my excitement at each new development. In fitting the backboards, Kieran managed to sneak in an element I had ruled out: the decorative nails, which I had thought too chunky and visually out-of-keeping with other furniture in the house. I still think the original call was right, but I am glad of the cheeky addition at the back. It added interest to a part of the object that would otherwise be relatively dull, and will remind me of the build process every time I move the boot bench. Kieran is a fan of subtle gestures like this – such as the roughly scalloped underside of the shelves, and the out-of-the-way placement of his maker’s mark. 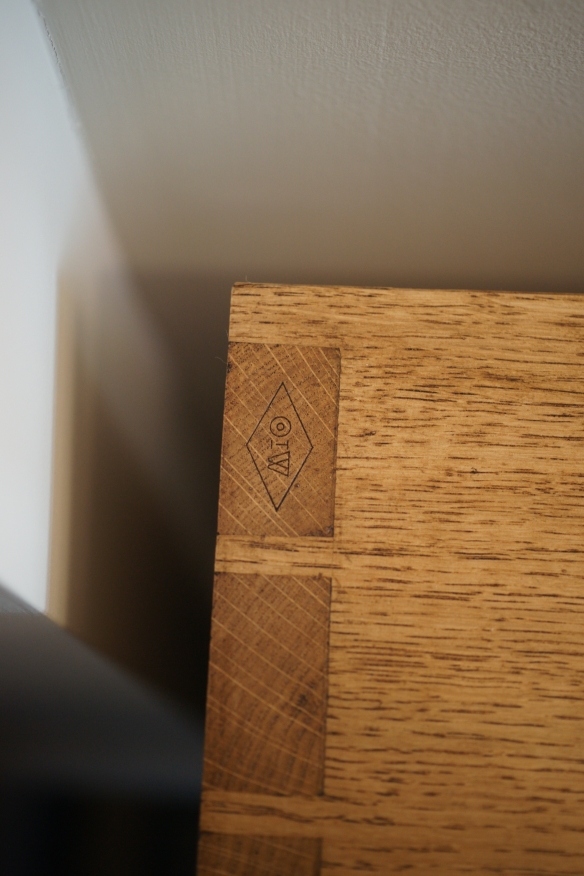 I should warn and confess other readers that it has been something of a torment to have our joint vision realised so gradually. But, like a good TV series, it has been worth the wait for each installment. And, knowing Kieran’s busy family life and career, it has been touching to see the regular commitment of his spare time. That’s one thing to bear in mind with an amateur commission: it does take time. From that initial conversation to collection was exactly a year – of which seven months was building time, and the rest was faffing on my part. I would estimate that the build time would equate to about three or four weeks’ work if done full-time (although there were additional deliberate delays to allow the wood to adjust to its environment). As a generally impatient person, the waiting was difficult but not unbearable for me.

And a few weeks ago I was finally able to achieve catharsis after months of anticipation: I rented a car and drove up to collect the boot bench while attending another gathering at Kieran’s house. First order of business on arrival was to view the boot bench in person. I was very, very satisfied to finally be able to see, walk around, touch, examine and test the weight of the thing. It has an unexpected solidity, and is a surprisingly tactile experience. After allowing other guests their own viewing, several of us carefully hoisted it into my boot, where I swaddled it in blankets. No longer bound to this build, Kieran took an expansive turn and began discussing more furniture to come from his workshop – including a more complicated variation on the boot bench for his own hallway. I meanwhile made an early exit, so I could get home at a reasonable hour and make use of my heavy-lifting housemates.

With the boot bench finally in position, my hallway has gone from messily cluttered to a state of butch elegance. The careful consideration of shape, proportion, material and finish have made the space substantially more functional and beautiful. My housemates have also stopped the boot-rack related banter (it’s a shallow seam to mine). The final seal of approval came this weekend from my mother, who dressed and photographed the boot bench for me – and said she’d be tempted to make a commission of her own.

2 thoughts on “The Policeman’s Commission”