I’ve written previously about how I find ritualised activity helpful for entering the right frame of mind at the start of a workshop day. And although at the end of a project I am always eager to start the next build, I have taken to spending a couple of hours cleaning up and re-ordering the workshop before I start work on something new. I suppose that this is really another ritual of sorts, helping as it does to clear both my head and the ‘shop.

The workshop was in sore need of some attention and tidying by the time I had finished the Policeman’s Boot Bench. Although I try to keep a clear and tidy workspace, working on the Boot Bench had prompted some major reorganisation of the ‘shop, including relocating my bench against the lefthand wall. Changing one element of a workspace invariably means you have to reorganise other areas, and I’d not had the time to complete this process since January. 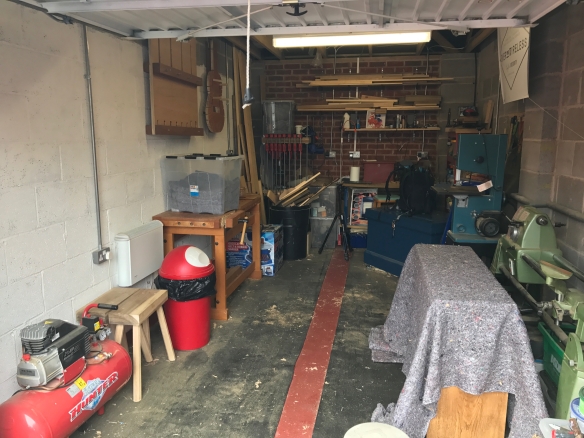 Having completed the Policeman’s Boot Bench – the shop is in need of a good clean and some thorough re-organisation.

And so although I am chomping at the bit to start building a staked work table (out of the Anarchist’s Design Book) for my study, I spent half a day clearing the shop, having a thorough clean, and re-organising everything into a more ergonomic and less cluttered, space. Sweeping up all of the hard to reach shavings once a piece is finished really does help to clear my mind for the next project. My Anarchist’s Tool Chest has become a favourite refuge for shavings, as it is just high enough off the floor to collect plenty of debris, but too low to the floor to get a broom underneath it. So after wheeling the tool chest out of the ‘shop, and pulling the workbench into the middle of the floor, I had a thorough sweep up followed by vacuuming any stubborn fibres I’d missed.

The much improved clamp and timber storage corner of the workshop

Moving my workbench from the middle of the workshop to the wall had provided much needed stability while planing stock. However, it had resulted in cramped working considitons at the right hand end of the bench, which was squashed up against a growing stack of lumber and my overflowing scraps bin (the contents of which towered above the brim of the bin, threatening to cascade across the ‘shop floor). I’d not had time to address this corner of the workshop while I was working on the Boot Bench, and this was my first opportunity to impose order. I emptied out the timber racks at the end of the workshop, reorganising the timber I was keeping, and consigning less useful pieces to the recycling pile. This meant that a lot of the loosely stacked timber could now go in the racks, with a couple of larger pieces being stored in the rafters. Only one plank of Canadian pine is now freestanding, and that is because at 16′ long it is 5’ longer than my workshop is wide. The scraps bin received similarly ruthless treatment, and the contents which survived the cull were neatly stacked back in the bin. The other source of clutter was my growing collection of Bessey sash clamps, which found new homes clamped around the edge of the go-bar station.

The final element of this ritual is to break down and clean all of the tools I have used particularly hard on a project – usually my bench planes, and some of the more specialist joinery planes. Although I clean my tools after each use and sharpen regularly, giving them some extra attention at the end of a build does keep them in good working order and gives me an opportunity to address any minor issues. This included tightening the frog on my Clifton No.5, as it had started to come a little loose and rattle – probably from several months of taking big traversing cuts through tough oak.

The re-organised and cleaned workshop, ready to start the staked work table

The workshop is now cleared and clean – providing the perfect setting to start the next project free of distractions or niggles. I’ve found the ritual of bookending each major build in this way to be very beneficial. So what rituals do you find help in the workshop?