I’ve written before about how when a project leaves my workbench I tend not to write about it again. Maybe that is entirely natural – it is very satisfying to write about the process of making, and there is an easy narrative arc to writing up projects and the insights offered by standing at the bench. But I do think that seeing projects once they have been released from the workshop, into the wild, can give a new context to the build process, especially when someone else is using something I’ve made.

The Packing Box loaded up and ready to go to Tom

When I made my first Packing Box from the Joiner & Cabinet Maker I did not have a particular use in mind for the box itself. It was a project I had wanted to build for three years, and I could see that there was a lot of lessons hidden within what was ostensibly a simple project. And so I approached it as a training exercise. But when I finished the build I discovered that the Packing Box itself was really quite charming, and instead of letting it languish unloved in a corner of the ‘shop I wanted to find a worthy use for it. After some weeks of pondering, I filled it with craft beer, mix cds, and an OtW tee, and sent it off to my good friend Tom Richards to say thank you for the outstanding work he had done on creating the branding for Over the Wireless. 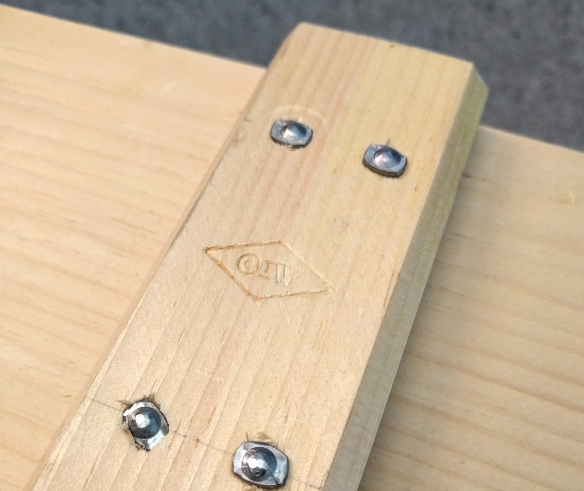 Occasionally since last summer I’ve wondered what Tom did with the Packing Box. And suddenly last week a series of photos popped up on Instagram, showing a familiar forest of clinched nails. It turns out that Tom has purposed the packing box as a memory box, holding several decades of gig tickets, cards, mix cds, and other precious ephemera he wants to keep safe. When I mentioned to Tom that I’d seen the Packing Box on Instagram he replied to me that he had thought “how perfect for the box of a ‘memories box’ be one of the memories itself”, which was incredibly touching! Tom kindly agreed to share a couple of photo of the Packing Box here on the blog.

I’m intending to make writing about projects that have escaped into the outside world more of a feature of the blog (all of which will be captured under the “In the wild” category on the right hand side of the screen). Hopefully we can get a conversation going about projects that have left the workbench and found their way to other people – something which Shaun’s excellent blog post already started several hours ago!

1 thought on “A Packing Box in the Wild”