The first two backboards have now been fitted to the Policeman’s Boot Bench, which means that I have only two more backboards to go before the casework is completely assembled. The end is truly coming into sight now!

Ignore the front knob and push the fence into the workpiece for a straight cut.

After my test cuts with the Lie-Nielsen No.49 last week, I was ready to cut the tongue and groove on the backboards. The No.49 is very easy to use and produces repeatable tongue and grooves in 1/2″ material, so I expect that it will see heavy use in my tool chest. Although it is a simple tool, there do seem to be a couple of key pointers to get the best out of it, and to my mind it behaves quite like a cross between a plough plane and a rabbet plane. Rather than take full length passes from the first push, I started at the far end of each piece with short passes that increased in length until I was planing the full edge, very much as you would with a plough plane. This helps establish the cut and prevents the plane from wandering off the line. The sole of the plane is not flat, rather it is shaped into a tongue and groove profile. This clever design means that once the cut is established, the sole of the plane will run in the emerging tongue and groove, and stop the plane wandering.

The sole of the No.49 is profiled to match the tongue and groove it cuts. This pofile keeps the plane cutting straight and true.

Finally, to avoid bruising the tongue and groove with the sole of the plane, I did not lift the plane out of the cut on the return stroke, but simply slid the plane backwards before pushing through another cut. The result was a crisp tongue and groove in only a matter of minutes.

After so much stock processing and joinery recently, I decided to spend a couple of minutes adding some subtle decoration to the boot bench. To enhance the appearance of the backboards I beaded the edge of the grooved board using my 1/8″ beading plane from Philly Planes. This is one of the most fun tools I own, but more importantly the shadow line from the bead will give the joint between the backboards a nice visual flow, and stop the transitions from one board to the next from being too abrupt. 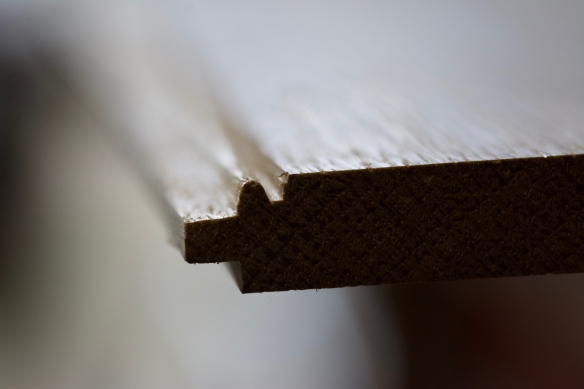 The beading profile on the tongue half of the joint.

After beading, I gave the front and back of backboards two coats of blonde shallac, followed by a coat of Libern Black Wax to the front face (which will be visible inside the bootbench). 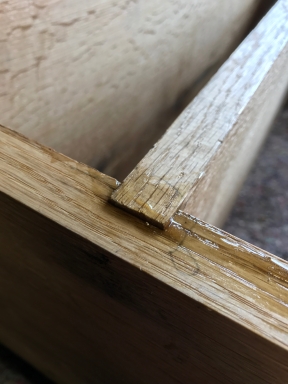 … and after. This project is my first use of dados, so I’ll take these joints as a win.

As I mentioned previously, the shelves were over-width when the boot bench was assembled. Fitting the backboards would require placing the bootbench face down, and while the shellac on the backboards was drying I trimmed the front edges of the shelves until they were flush with the sides and top of the carcase. This was a slightly awkward operation as the bootbench is too big for my workbench, and I don’t have enough saw benches to put one under every corner. The result was weilding a No.8 jointer while kneeling on a concrete floor. Not entirely comfortable, but the pay off was removing the excess material and dried glue to reveal tight and well fitting dados.

Once the shelves were flushed up I was able to maneuver the boot bench face down on a pile of moving blankets, and fit the backboards. The first two backboards were fitted one at each end, as this means I can adjust the size of the remaining backboards to fit the precise space available. Each backboard was glued down their outermost long edge into the corresponding rabbet, and nailed to each of the shelves with decorative wrought head cut nails from Tools for Working Wood. As the backboards are 10 1/2″ wide I used two nails per shelf, on 3 1/2″ centres. Pilot holes were drilled using a tapered drill bit and my Grandfather’s egg beater drill, and the nails were knocked in using my 16oz hammer by Black Bear Forge. This combination of one glued edge and nails gives the carcase further rigidity but still allows for wood movement as the nails will bend under seasonal expansion and contraction. The nails are gorgeous, and even if they won’t be seen once the boot bench is installed it pleases me to know they are there. The inner two backboards will be nailed in, but not glued. 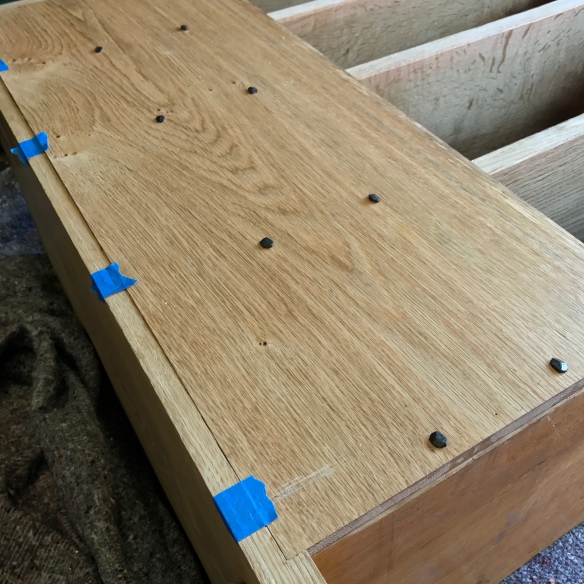 One backboard fitted – the blue tape reminds me where the top edge of each shelf is.