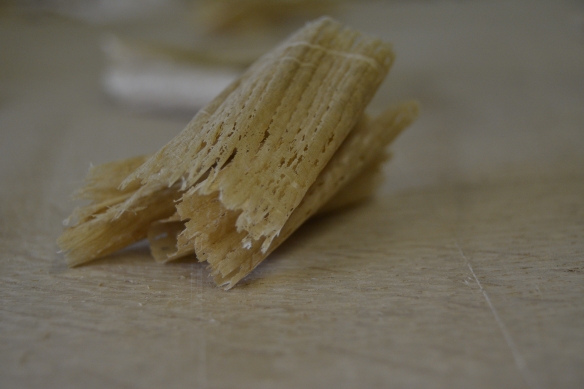 When I started planning how I was going to approach the Policeman’s Boot Bench one of the things I was very keen to do was to apply some of the pre-industrial woodwork lessons written about in Mortise & Tenon. Laying out the feet using George Walker and Jim Toplin’s “artisan geometry” was one aspect of this, but the other was challenging ideas of flat and smooth. All the show surfaces – casework, and the tops of each shelf, have been planed smooth and flat as you would expect, but for the underside of the shelves I wanted to give the client something of a textural surprise and have a contrast to the smooth show surfaces. This tied in neatly with my approach to fitting the shelves to the dados, as following each fitting the shelves were left with a hard step between the fitted tongue and the rest of the shelf. I wanted to remove this step and thickness the shelf in a time efficient way, and also leave a different texture.

The underside of the shelf – the traversing cut has left a gently scalloped surface and slightly woolly texture.

Enter traversing cuts – essentially planing perpendicular to the grain rather than along with this. I’ve written about traversing cuts previously, and this is a very efficient way to remove large amounts of material quickly. It works because wood is strong along the grain, but relatively weak across the grain. Using a cambered iron in a jack plane and planing across the grain therefore allows you to take heavier cuts and remove more material with less effort. Which for this task was perfect. The attraction in stopping after the traversing cut for this task, rather than following up with a jointer or smoothing plane, is that the texture from a traversing cut is very different. Instead of that mirror like sheen that can be achieved straight off the plane when working with the grain, the traversing cut leaves a gently scalloped surface which has a slightly woolly texture. Not only is this an efficient way of working, but also the variation in textures really appeals to me. IKEA furniture is mono-textured, because it is made out of termite-vomit woodchip covered in a wood grain effect foil. Dull, dull, dull. A variation in textures announces that a piece of furniture is handmade, and also encourages the user to explore the furniture with their fingertips. The different textures and surface finishes invite the user to touch the piece, and to appreciate the different characteristics of the wood – as I previously discussed in my guest post on the The Daily Skep. Returning to Mortise & Tenon, leaving hidden surfaces such as the underneath of drawers or tables finished with a traversing cut is a common occurence in pre-industrial furniture.

Traversing the shelves to bring them down to final thickness

So that’s why I approach thicknessing the shelves in this way. The how is much more straight forward. I set a marking gauge to the thickness of the tongues at the end of each shelf, and scribed a line along the front edge of the shelf. Then working front to back, traversed the board until the steps at the end of the shelves had disappeared, and I hit the marking gauge line. Nice and straight forward.

The shelf before thicknessing – there is a definite step at present 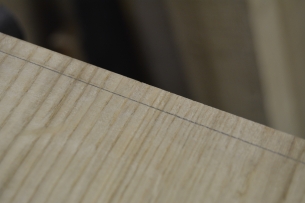 After thicknessing the step has gone

I also pre-finished the top and underside of the shelves in readiness for gluing up the casework. This is partly because once the shelves are inserted there won’t be much room to apply finish, and also because hide glue will not adhere to the finish, which will make clean up a lot easier. The tops of the shelves received two coats of blonde shellac (a 2lb cut) followed by a coat of Liberon Bison black wax – the same as the end pieces and top. The underside of the shelves were finished with two coats of the same shellac, but no wax. Because the finish prevents glue from sticking to the shelves, it is important to mask off the end of the shelves that fits in the dado. To do this accurately I placed each shelf in the dado and marked off with a fine pencil the top edge of the dado. Low tack blue painter’s tape then masked off the end of the shelf to the pencil line, allowing me to paint shellac up to the edge for a crisp finish line. 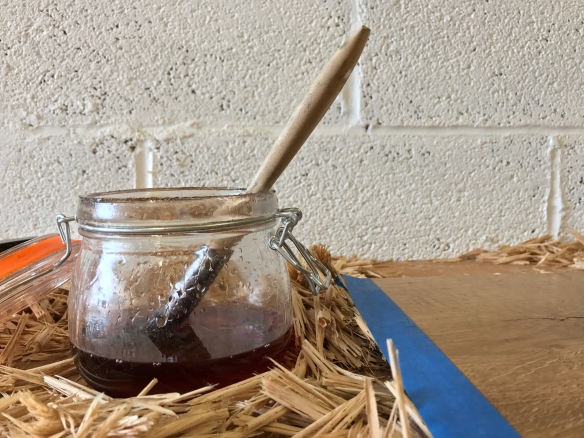 Moving between traversing and applying finish developed a nice rhythm – each planing session lasted for just 30 minutes before applying another coat of shellac or wax to shelves that were fully planed. The staked saw benches have proved to be invaluable recently, including as a finishing table for the shelves while I was planing at my bench. This mixture of tasks also had the effect of keeping the work fresh and focused – another lesson from pre-industrial craftsmen.

Three shelves finished and ready to be glued in. The shellac and black wax really brings out the figure.