“Spaced” was one of the finest (and most quintessentially English) comedies of the late ’90s. This is where Shaun of the Dead and Hot Fuzz originated.

All of the recent talk about dovetails skipped an essential stage of building The Policeman’s Boot Bench. When I started to design this piece I wanted to draw on the principles in The Anarchist’s Design Book, and to embrace simple and robust joinery I’d not previously had the opportunity to use in anger. So the shelves are let into the sides by dados, and the tongue and groove backboards fit into rabbets (or rebates, depending on which side of the Atlantic you reside). I use a shallow rabbet on all of my tail boards when dovetailing, but I’ve not used more substantial rabbets as a joinery technique before. The design of the boot bench really lends itself to this approach, and I have enjoyed expanding the armoury of techniques available to me. 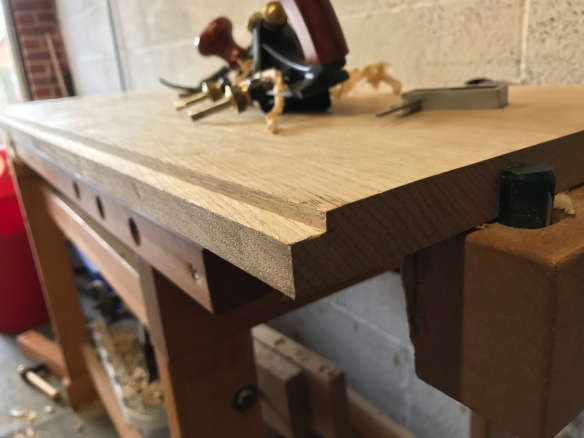 Once the top was flattened and brought down to thickness I was able to cut the through rabbet to take the ends of the back boards. This rabbet is 1/2″ wide and 1/4″ deep, and runs along the back edge of the top. The Veritas Skew Rabbet plane makes short work of this sort of task, and it only took a few minutes before I had a dead square and flat 43″ long rabbet. I’ve found that this plane can be fussy to set up so that it is cutting square and true, but time tuning it is well spent. In use, the most important thing to do is to avoid tilting the plane – I find this is easier if I position my body so that my head is above and slightly  to the right of the plane. The right hand then pushes the plane forwards and my left hand pushes the fence into the workpiece.

In contrast to the rabbet in the top, the rabbets in the end pieces are stopped at one end. This is because the back boards terminate level with the bottom shelf rather than running to the floor. Before cutting these rabbets I cut the dados for the shelves, and marked off the baselines for my dovetails. This established both end points for the rabbets, and also delineated the waste into sections between each dado. I cut the stopped rabbets with a large router plane, as this does not bottom out when cutting stopped grooves like the skew rabbet plane will, although it is a slower process. Although I initially stopped the rabbet at the dovetail baseline, I did need to extend it a little more when assembling the dovetails to allow a good fit between the haunched tail and the rabbet in the tail board. 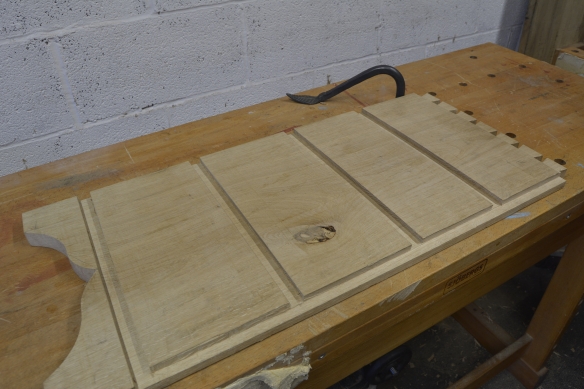 The final rabbet was my customary shallow (1/16″) rabbet along the tail boards. This rabbet assists in accurately transferring dovetails to the pin board when cutting the joinery, and only takes a couple of swipes with the skew rabbet plane.