That moment when you first introduce a hand plane to a rough timber always feels like workshop alchemy to me, as the dirty and splintered outer layer is carefully stripped away to reveal beautiful woodgrain ready to become furniture or a musical instrument.

Having left the oversized stock for the top and sides of the boot bench to acclimatise for a couple of weeks, I’ve started the build in earnest and the two sides of the carcase are now processed and at final dimension. When working with rough timber my first step (before I reach for my jack plane) is to give each surface of the workpiece a good scrub with a brass bristled brush – this removes the worst of the timber yard grime and any grit that would otherwise ruin the cutting edge of my plane iron. 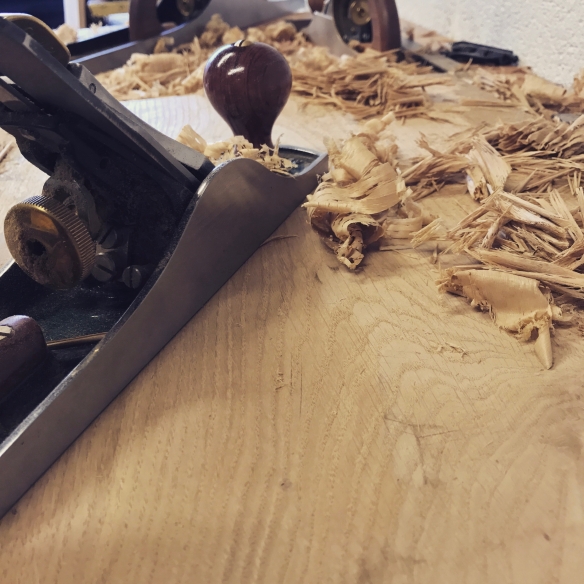 The oak boards were free of twist, but there was a noticeable amount of cupping which I spent time to remove, using the same historically informed handwork method I’ve written about before. Dedicating 2016 in large part to the consolidation of solid handwork fundamentals, particularly the projects in the Joiner & Cabinet Maker, has definitely paid off, and processing the boot bench timber has so far felt like second nature. Not that there isn’t always plenty to learn – despite having processed the timber for several projects last year entirely by hand, the boot bench is by far the largest casework I’ve worked on since my Anarchist’s Tool Chest in 2014, and using larger stock does take a little more effort to keep flat and true. But essentially the technique is the same – traversing cuts with the jack plane to quickly remove stock, following up with the jointer and smoother on the show face, and just the jointer on the internal faces. You all know the drill by now. And really it is nice to be working on a project of a different scale – the sides of the boot bench are 13 3/4″ wide by 30″ long, compared to much more compact dimensions for the Packing Crate, School Box, or saw benches I was working on last year. 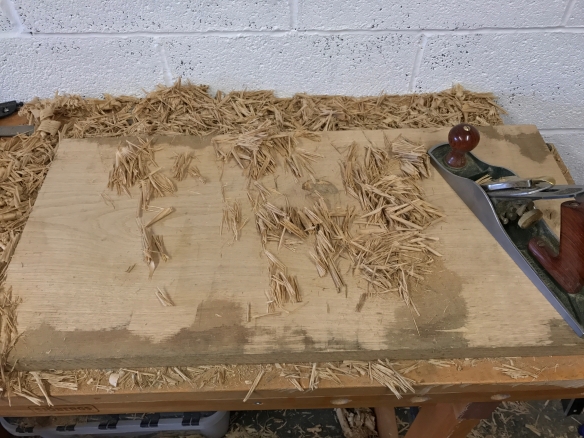 Moving my workbench against the wall has increased stability and means I can take a heavier cut.

As I discovered when I set to work on the first side piece, the biggest challenge was keeping my bench still when traversing the grain for a heavy cut. The added mass of the wide oak boards had my (already footloose) workbench skittering across the workshop floor. Cue an impromptu reshuffle, involving decanting exactly one half of the workshop and moving the workbench against the wall, then moving the displaced contents around. I’ve been meaning to do this for a while, partly to keep my workbench from dancing across the room as I work, and also to open up the middle of the workshop for breaking down long stock on the saw benches, but I definitely wasn’t expecting to attempt it in the middle of a work session. There is a bit of shuffling and organising left to do, but so far I’m very pleased with the workflow improvements and increased bench stability from this layout, and I will write more separately once I’ve finalised the new layout. 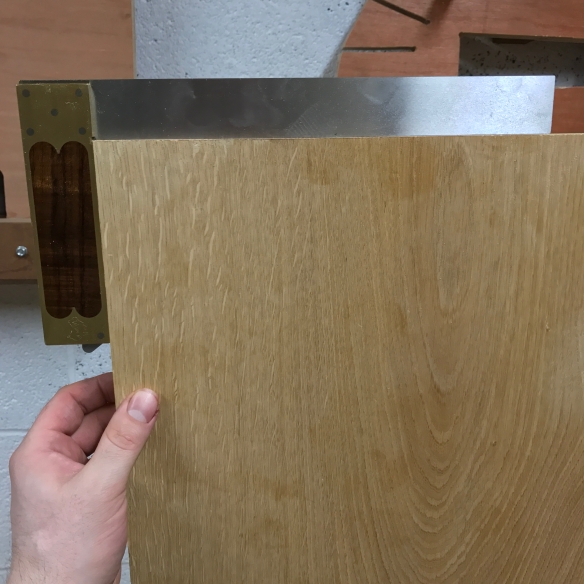 No board is square until my Vesper 10″ square says so.

With the workbench relocated against a sturdy wall processing the two side pieces went pretty smoothly. This oak is beautiful – even though it is flatsawn the boards are wide enough to show some lovely medullary ray flecks at the edges as the grain turns to quartersawn. It is also very hardy stuff, and to maintain a good clean cut I found it necessary to resharpen the jack and jointer plane irons for each board. Once the sides were surfaced, thicknessed, and brought down to 13 3/4″ wide I then brought them down to final length by shooting one end square and then working the opposite end until I hit a perfect 30″. The Lie Nielsen No.51 shooting board plane and a good shooting board (I use the Evenfall Studios wide shooting board) make shooting to a precise length very easy, even on wide stock. 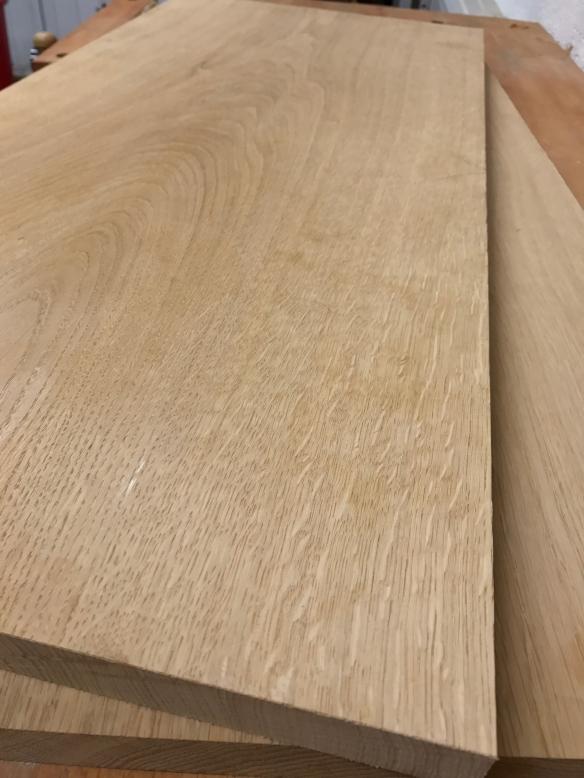 This surface is straight off the plane blade. A simple coat of shellac and hard wax will look wonderful on the completed boot bench.

I’ve still got the top of the casework to process, although I may have a brief break from the grunt work to cut the joinery for the sides.