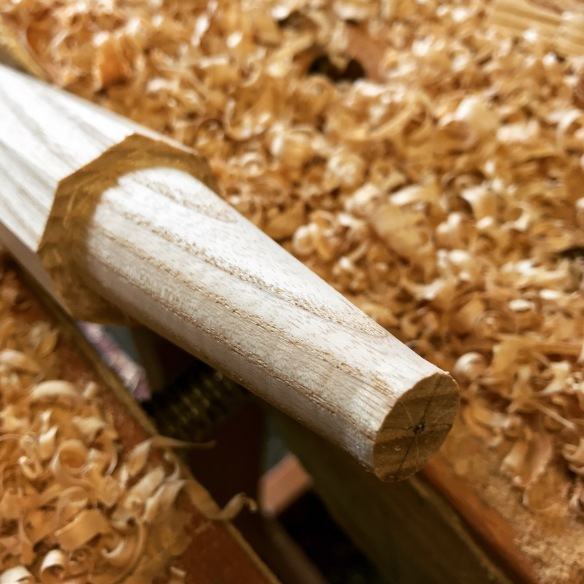 The advantage of building several of the same project is that with each successive build you can take what works, learn from mistakes, and also try new approaches to the key processes to see if there are more efficient, or precise, ways of working. With the second staked saw bench I’ve been focusing on consolidating the skills developed with the first build, but also approaching some of the key stages of the build a little differently.

When it comes to cutting the tapered tenons I’m specifically interested in removing the bulk of the waste as rapidly as possible, and getting as close as possible to the finished tenon shape before I reach for the tenon cutter. My approach for the second batch of legs has been largely as I described for the first saw bench, with one significant exception. In The Anarchist’s Design Book Chris suggests that the tenon could be shaped with a coarse rasp in the absence of a tenon cutter or lathe. Although I’m still using the tenon cutter to reach the final shape, with these legs I thought I’d try rasping the tenon.

Using a coarse Auriou rasp to quickly remove the waste

It turns out this approach has a number of significant advantages over rough shaping with a spokeshave (as I did on the first set of legs). Firstly, the rasp will reach right down to the shoulder of the tenon, while a spokeshave invariably bellies the tenon because the shoulder catches on the sole of the shave. Secondly, thanks to the left-to-right movement of a rasp, you can work round the tenon and cover more ground before you have to rotate the leg in the vise, which means more time is spent shapring and less adjusting the workholding – a much more efficient process!

Finally, the rasp can work very specific localised areas which is useful if splitting off the waste has left bumps which would foul the tenon cutter and which the spokeshave cannot reach, and also allows you to slightly hollow the middle of the tenon prior to introducing it to the cutter. What is the advantage of hollowing the tenon? Well. If a tenon is slightly oversized the lower portion of the cutter will start to bite first, and will continue to cut until the tenon is shaved to final dimensions. This causes uneven wear on the cutter as the lower part of the blade is constantly working, and will become dull long before the rest of the blade. Uneven wear necessitate sharpening more often, which is far less fun than making shavings. To encourage more even wear along the length of cutter (and hopefully less frequent sharpening), a slightly hollowed tenon should in theory allow the top and bottom of the cutter to bite just before the middle section – and by “early” I mean no more than one or two turns before the middle part of the cutter bites. I certainly needed fewer turns of the cutter in order to bring my rasped tenons to size, which suggests that I’ll need to sharpen the cutter less often in the long term.

Paring the waste to the shoulder of the tenon

So my process for these tenons has been to split the waste off with a 1″ chisel and 16oz mallet, after which I’ve cleaned up the tenon to cylinder with a spokeshave, followed by rasping to a tapered tenon using a 10″ 9 grain Auriou rasp. For small adjustments I’ve also been reaching for a 7″ 13 grain Auriou rasp.

The cutter invariably bottoms out on the tenon shoulder before the lower section of the tenon is at final shape. However by that point there is not much material left to remove from the bottom of the tenon, and what little there is can easily be identified by the faint ledge left by the edge of the cutter blade. To true up this part of the tenon I’ve been using a 3/4″ chisel, held tight against the finished part of the tenon as a reference surface. Although paring towards the shoulder involved working against the grain, with a sharp chisel taking only very light cuts there isn’t any real danger of tearout, and for particularly gnarly grain a sideways slicing movement can be used to remove the waste without tearing the grain.

Four completed tenons, ready to be set into the bench top.