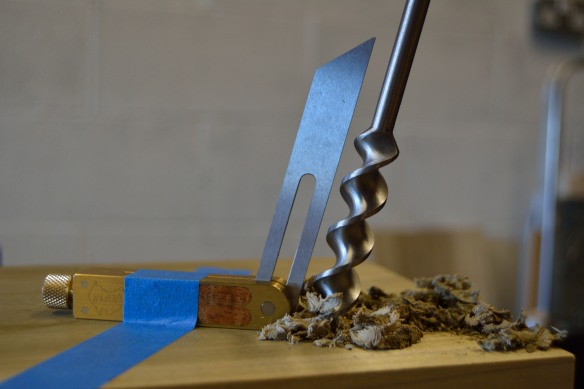 A Vesper 4″ sliding bevel, Jennings pattern auger bit, and North Brothers brace, has to be the most fun way to bore holes

It occurs to me that every build process can be seen as a series of straight forward operations, punctuated by moments when the risk of failure becomes significantly greater. There has been a lot of great discussion recently about the relationship between craftsmanship and the risk of failure, and for me one of the most captivating ideas offered by Peter Galbert in his outstanding book was that chairmaking places the maker much closer to the risk of failure than some of the other woodcrafts. From my perspective, risk of failure becomes greater during any significant glue-up operation in a build, although clear planning and a dry-run can help mitigate the risks associated with such a crunch point.

Which is a roundabout way of saying that the first of the pair of saw benches is now glued up and ready to be leveled.  I’m pleased to say that gluing up the saw bench was one of the least stressful glue-ups I’ve ever had, which is remarkable when you consider that this is my first time building with staked and wedged joinery. I can’t take any credit for the ease of glue-up however (as much as I’d like to) – I think that the simplicity and effectiveness of the joinery lends itself to a straight forward and stress free experience. 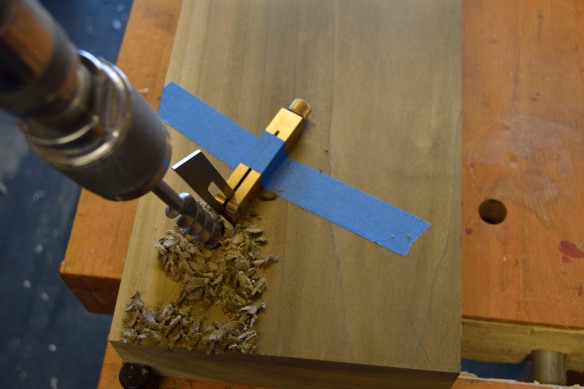 Here you can see the funky compound angles – not a 90 degree reference line or surface in sight!

But I’m getting ahead of myself a little. Before I could fit and glue the legs I needed mortices to house them. The mortices are drilled through the bench top using a 5/8″ bit and then reamed to match the taper of the leg tenons. This was one of the most challenging, yet enjoyable elements of the saw bench build, and the introduction to chairmaking geometry was one of the reasons I decided to use this saw bench design over the other (very good) options.

Drilling the holes is pretty straight forward, despite the compound angles involved. The key is to go slowly and to have a good sliding bevel set up on the workpiece to keep you boring at the right angle. Chris writes in The Anarchist’s Design Book that compound angles are just as easy as boring at 90 degree, and he’s got a point. Boring the hole at a funky angle to both the surface and the edges of the bench top feels counterintuitive at first, but the sliding bevel offers an excellent guide and once you’ve got the body position dialed in it becomes second nature. I used one of the excellent Jennings Pattern auger bits by Tools for Working Wood, driven by my 1920’s era (pre-Stanley takeover) North Brothers brace, which is definitely my favourite way to bore holess. Despite being nearly 100 years old the brace chuck holds bits with an iron grip, and the 10″ sweep is smooth as silk.

Reaming the holes is more challenging, as the sliding bevel offers much less guidance against a conical shaped reamer. Instead, I took Chris’ advice from the book, and shaved a test tenon using a length of spare curtain pole – the pole shaved to a clean tenon very easily, and gave me something with which to test the angle I was reaming every 10 turns or so of the brace. This then becomes a process of checking using the test tenon, and making subtle adjustments to keep the reaming on track with the right angles. I didn’t quite manage to ream all four mortices to the same angle, but hopefully the finished bench won’t have too much of a resemblance to Bambi-on-ice. We shall see. To ream the mortices I used the Veritas reamer, which was again driven by my North Brothers brace. The Veritas reamer has the same included angle as the tenon shaver, which keeps things simple and ensures that the tenons will match the mortices.

Checking that I’m reaming at the right angle. This one looks ok.

Once the mortices were all reamed I tested the fit of the legs, and numbered them along with the matching mortices – small steps like this definitely take the pressure off during glue up. I also recycled some scrap oak into wedges. The final step before glue-up was then to kerf the tenons to accept the wedges. The bench vise on my Sjoberg bench is guided by two rods which prevent racking, but also meant that the vise had only the most precarious grip on the tapered octagonal legs. My Moxon vise on the otherhand has a little bit of give in the front jaw, partly due to the lack of any guides and also the enormous force exerted by the cast iron wheels. All of which meant that the Moxon was able to close around the legs despite their taper, and grip them tightly while I kerfed the tenons with my dovetail saw. It’s a useful reminder that not all racking is bad!

After running through a dry run (which did not include hammering in the oak wedges, because I’m not sure they would ever come out again!) I glued up the saw bench using Titebond Hide Glue which had been gently warming in a mug of warm water for 90 minutes, working one leg at a time. Once the legs were glued and hammered in (I used a 24oz mallet, but I’m sure a lump hammer would work just as well) I flipped the bench over and knocked the wedges in, again using the Bluespruce 24oz Joiner’s mallet. 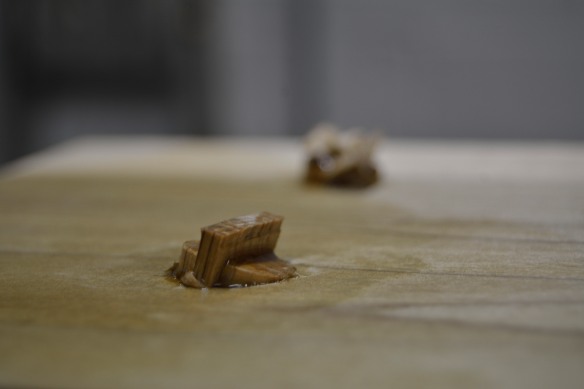