I first read The Joiner & Cabinet Maker back in 2013 right as I started to broaden my focus from lutherie to include furniture making – it was the second publication by Lost Art Press I read (the first being The Anarchist’s Tool Chest). The book made an immediate impact with me; appealing to my love of history as much as that of woodwork. But more than just being a historical curio, as I digested the pages of The Joiner & Cabinet Maker it became apparent that it would offer a properly structured way to learn furniture building techniques using a minimal, hand-work focused, tool kit. Which was pretty much exactly what I was looking for at the time. I think in my very first post on this blog I mentioned an intention to work my way through the projects in The Joiner & Cabinet Maker – 2014 was going to be the year I finally got stuck into those projects, but then the Anarchist’s Tool Chest class happened (which was an incredible way to start my furniture building journey) and The Joiner & Cabinet Maker got pushed to the back of the queue again.

And this week, I finally tired of pushing these projects down my to do list. A trip to the timber yard yielded up the 12’3″ long board I needed to make the packing box, so I reached for my hammer and stash of cut nails and set to it. I won’t give a blow-by-blow account of how I approached this build – I followed how Thomas carried out the same project in the text, and if you want to see how Thomas builds the box then you should buy the book. What I do want to reflect on however is the very valuable learning points offered by what is on the face of it a very simple build.

The packing box is held together purely with nails – no fancy joinery, no glue. Just nails. And it is rock solid. As this is the very first proper piece of work Thomas carries out as an apprentice, it is built with a very small tool kit of ruler, chalkline, jack plane, smoothing plane, square, marking gauge, rip and cross cut saws, hammer, and either a brad awl or drill. That’s it. Oh, and Thomas only has 5 hours to build the packing box. Five hours to go from rough board to finished casework makes this one of the swiftest furniture projects I’ve come across.

A two-piece top held together by nailed on battens. Simple, but rock solid.

So what exactly are the learning points?

Efficient use of material – Thomas (and I with him) started with a 12′ 3″ board 9″ wide and had to produce a packing box that met the customer’s measurements. The size of the box means that there is very little waste left from the board so efficient use of material, and some clever lay out to harvest the long battens, is essential.

Efficient working – five hours is not long when you have to build a complete box. I confess that I didn’t manage to complete the build in the alloted five hours (Thomas is evidently a far better apprentice than me), but that’s ok. Completing the build in five hours or less is a matter of working extremely efficiently, and not rushing. Slow is smooth and smooth is fast. Clive never tires of telling me this, and he is bang on the money.

You can make plenty with a very simple tool kit – Thomas doesn’t have a shooting board, so he has to square material using nothing but a bench vice and smoothing plane, with careful measurement. This sounds like a hard way to work, but actually it works really well and doesn’t take too long. Yes a shooting board makes things easier (especially on wide boards) but I don’t feel wedded to one anymore – I know I can do this freehand without too much bother if I need to.

Hand tool fundamentals – this project is all about accurate layout, sawing to the line (which reduces the amount of time you then spend planing stock to dimension), jointing long edges for the two-piece bottom and lid, squaring up stock, and most excitingly, nail clinching.

Nail clinching – This was my first time nail clinching, and one of the reasons I wanted to give this project a try. Effectively, clinching (or clenching) involves using a nail as a staple – driving it through two pieces of wood before encouraging the end to then turn back into the workpiece. This increases the holding power significantly, and is the reason why the packing box is so solid. The stock I was using for this project was closer to 3/4″ thick rather than the 1/2″ thick timber used by Thomas, and so the one change I made was in using 6d nails rather than the shorter (and thinner) 4d nails Thomas uses. The thicker 6d nails were slightly more work to clinch, but once I’d got the hang of encouraging them to change direction (aided by my new hammer from Black Bear Forge) they worked a treat. The trick, if you can call it that, for nail clinching is to find the right diameter pilot hold for the cut nails. I used tapered drill bits, and took my time experimenting with different sized pilot holes in some scrap to make sure that the nails would not split the workpiece.

The butt joints on the end of the packing box are square and tight – which goes to show that a shooting board is a luxury not a necessity.

I have another 12’3″ pine board sitting in the workshop, which I intend to turn into another packing box to reinforce the techniques and learning points this project has offered. And after that, it’ll be onto the second project from The Joiner & Cabinet Maker – the School Box. 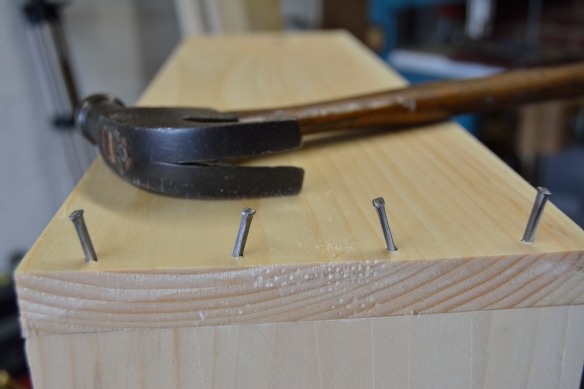 I used 4d fine finish nails to join the sides to the ends. Angling the nails as shown increases the holding power.

7 thoughts on “Don’t forget to clench”