With less workshop time than I’d like to at the moment it is easy for some of the more mundane tasks to fall by the wayside, no matter how essential they are. I much prefer making tools blunt to sharpening them, but using a blunt tool is dangerous and results in sub-optimal work, neither of which are satisfactory. So I’m trying to make a concerted effort to spend my first 15 minutes as soon as I step into the workshop sharpening. No one (and I mean no one) sharpens as frequently as they should, but little and often is proving to be a sustainable and efficient way to keep all my edge tools in a state of readiness. The other advantage I’ve found is that 15 minutes at the oil stones serves as a mental cleanser to block out the demands of the outside world and get into the right mindset for precision woodwork. 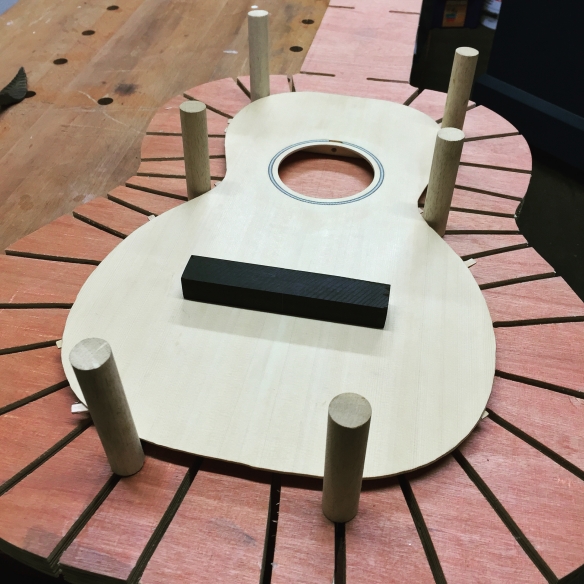 I hold the soundboard in a solera at this stage, mainly to keep it safe from knocks – having spent some time on the soundboard I want it to remain safe until the guitar is assembled!

Using sharpening as a meditative exercise has paid off this week, as I’ve been fitting the bridge to the parlour guitar. In my opinion fitting the bridge to the soundboard is both one of the most critical, and also most difficult, operations in building acoustic guitars. Critical because a solid joint is necessary to ensure that the string energy excites the soundboard efficiently (which creates the sound of the instrument), and also to preserve the structural integrity of the instrument. Difficult because a good joint depends on precisely matching the curve of the soundboard with a curve in the base of the bridge blank.

Some lutherie manuals call for the base of the bridge blank to be straight and flat at the point of gluing the bridge to the soundboard. This in my opinion is a fundamental mistake. The soundboard of an acoustic guitar curves across its width and length, thanks to the bracing. Fitting a flat bottomed bridge would at best force part of the soundboard out of the curve previously set by the braces, and at worst would result in a poor glue joint. Neither of these is a particularly promising idea, especially when you start to apply several hundred pounds of string tension to the bridge. And if you’ve taken the effort to plane a nice curve into all of those braces, why would you want to undo that good work at this point?

So instead I opt for the hard road of planing a precise curve into tough ebony or rosewood. What makes this even more fun is that the soundboard acts as a hydrometer, and will subtly change shape with humidity changes throughout the day. So not only are you using a tool designed to plane things flat to create a concave curve, but you’re trying to hit a moving target as you do so. Success is determined by using a super sharp block plane blade, taking very fine cuts, plenty of patience, and measuring a-plenty.

There are ways you can make this easier. A strip of low-tack painter’s tape on the soundboard makes placing the bridge in position easy (it’s important to use low-tack tape to avoid pulling grain fibres out of the soundboatd). I place the tape so that the rear edge falls along the front face of the bridge. Then when I come to check the fit of the bridge it is just a case of butting it against the tape, and easy placement without needing to reach for my ruler everytime means that I am inclined to check my progress more often.

In terms of planing the curve into the bridge blank, I start by planing a gentle hollow into the middle of the bridge until the ends of the wings (which at first will be above the surface of the soundboard) touch the soundboard. Then it is a case of planing the curve across the depth of the bridge (between the front and rear faces). I do this by working across the grain, from each long edge to the middle of the bridge, with a very fine cut. It is important that the two long edges of the bridge form a good joint with the soundboard, but also that you avoid forming a hollow joint by removing too much material from between those edges, as most adhesives will not form a lasting bond across a hollow joint (and that is the path which leads to your bridge detaching itself from the soundboard under string tension).

So plenty of checking is necessary. To check the fit, I place the corner of the front edge in position, holding it up to the light to ascertain how that edge fits. Then I do the same with the corner of the back edge. If the edge contact is good along the full width of the bridge on both edges, then I rock the bridge back from the front edge so that the base contacts with the soundboard. If material needs to be removed from the base then there is a subtle feeling like the bridge being cushioned as it makes contact, in which case it’s back to taking fine cuts across the grain. When the fit is right, there is a gentle “click” as both edges make contact with the soundboard without any interference from material between the edges.

You can see from the shavings on the cap how fine a cut this plane is set to.

Fitting the bridge is not rocket science, nor does it involve arcane techniques or specialist tools. Just a lot of patience  and checking progress against the soundboard. The pay off is a solid joint which will result in an instrument with good tone and the strength to withstand string tension.

On a bridge with scalloped wings this would be the point at which I glue the bridge to the soundboard. However, as this bridge will have pyramid wings those need to be carved prior to glue-up, which I will cover in my next post.