So this is my 100th post on the blog. I didn’t really expect anyone to read this blog when I started writing nearly two and a half years ago. Nor did  I really think about whether I would reach 100 posts and still be going strong. So 100 posts feels like a milestone worth celebrating. Maybe there will be whisky.

The surfaced Red Gum back for the parlour guitar

With the parlour guitar soundboard braced, I’ve now turned my attentions to the back of the guitar. I am using a very nice set of American Red Gum, purchased from the nice chaps at Brook Guitars, for the back and sides of this guitar.

The process for gluing and surfacing the back plates is the same as for the soundboard (which I have written about previously). So, jointing the plates on a long grain shooting board, gluing them in the thin panel jig, and then surfacing with a bench plane set to a fine cut. But just because you have carried out a certain process before doesn’t mean that you shouldn’t give it serious consideration the next time you come to it, as there are always ways to improve either the end result, or the efficiency in reaching that result.

Jointing the soundboard and back for the parlour guitar are a case in point. Ordinarily I use my No.5 bench plane for preparing this joint, but for the soundboard on this guitar I decided to experiment by using the No.8. It is after all a jointer plane, so this sort of work is what it excells at. As a comparison, I jointed the back plates with my Clifton No.5. Surprisingly, I found it a faster process to get a solid joint with my No.5 than the longer No.8. There are, I think, several reasons for this. Firstly is that the joint on a soundboard or back is determiend by the grain pattern, and consequently is rarely perpendicular to the top edge of the plates. For this reason, I use a slightly different technique for shooting the joint than I would for, say, shooting the end grain of furniture pieces square and straight.

This grip is how I joint soundboards and backs using my No.5 bench plane

When shooting the joint for guitar plates, the fingers of my right hand are imediately in front of the mouth of the plane, while my forearm rests along the side of the plane. The egde of work piece hangs over the shooting board. When shooting the joint I attempt to plane a concave curve, with pressure in the first section of the cut being exerted by my fingers. The latter half of the cut is then made with the pressure coming through my forearm to the heel of the plane. This is contrast to an end grain shooting board, where the raised edge of the shooting board would guide the plane to a cut that is square to the top edge of the workpiece.

The smaller body of the No.5  is much easier to steer with the forearm compared to the No.8, and I achieved a solid joint in slightly less than half of the time taken for the soundboard. It was then a matter of clamping the jointed and glued plates in the thin panel jig. The No.8 is a wonderful tool, and one which gets a lot of use in my workshop, but for this specific task the No.5 remains my go to solution.

The Red Gum back in the thin panel gluing jig

Cleaning the glue line on a soundboard or back is simultaneously thrilling and a little terrifying. When first out of the jig the squeeze out and rough sawn timber gives the glue line a decidedly rough appearance which doesn’t provide any hint as to how good the joint itself is. As the workpiece is surfaced, the glue line is cleaned up and starts to reveal whether the joint is good and tight or whether there are any hidden voids. 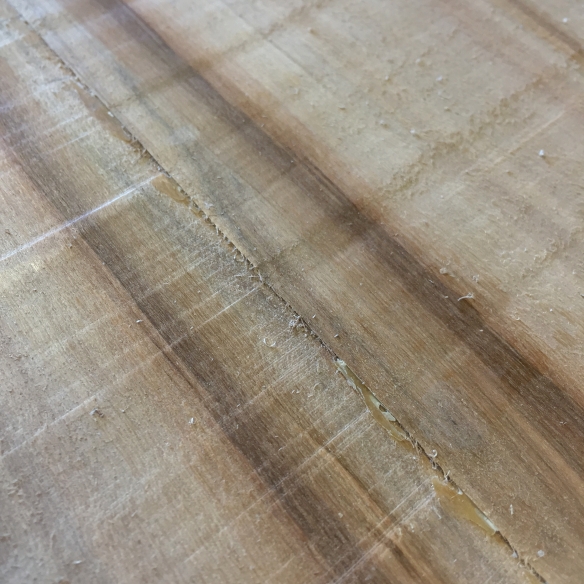 The glue line before any clean up.

This particular set of Red Gum was interesting to work with, as the plates needed to be offset in order to match the grain. However, the timber cleaned up very nicely straight off the plane blade, and the grain is really striking. Next time around (on post 101!) I’ll look at cutting the back to shape and thicknessing it.

The same glue line after clean up. There is no visible line, and the only way to spot the joint is to count the grain on either side.