The following is based on an article I wrote for issue 237 of Furniture & Cabinet Making.

Although there is a reassuring lack of ancient spike filled pits under my bench, and no nest of vipers guarding my tool chest, I have recently found myself drawing inspiration from my favourite childhood Indiana Jones movies and assuming the role of a workshop archaeologist (sadly this is where any comparison to Harrison Ford ends). 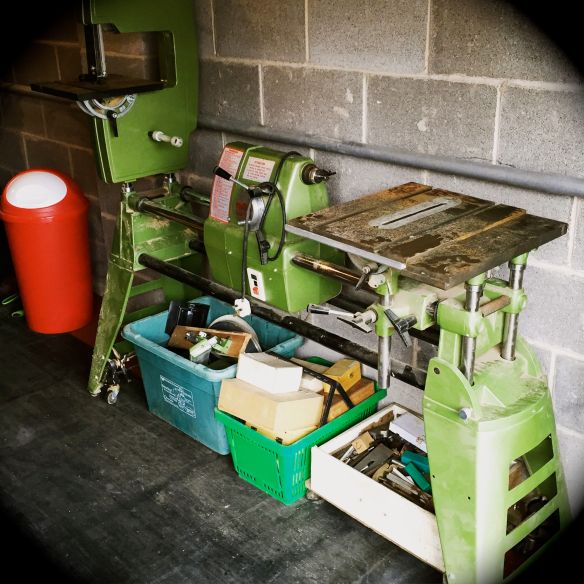 Thanks to a family friend I recently came into possession of a large batch of tools being disposed of in a house clearance. I had no idea what was included in this collection, so when several large boxes where unloaded from the delivery van I was curious to discover what they contained. A pristine condition Shopsmith combination lathe/ band saw/ disc sander machine was the undoubted centrepiece, which means that I can finally build that pair of Roorkee chairs I’ve been promising myself. The rest of the collection was a jumbled assortment of smaller items in several battered hardwood boxes, and I have been slowly sifting through these crates and working out exactly what they contain.

I didn’t know the former owner of these tools, nor do I know anything about him other than what his tools tell me. And so I have started a process of workshop archaeology; piecing together an impression of another craftsman from (what is probably just a selection of) his tools. And in doing so, the idea of heritage (about which I have written before) started to call its siren song. Because I began wondering what a future woodworker and workshop archaeologist would surmise from the contents of my tool chest. If all that is left to tell the story of my craft is my tools, what would they say?

Thanks to two readers, I now know what this mystery tool is.

I don’t think the contents of my tool chest would surprise anyone. It is very obviously focused on hand tool work, and save for a couple of specific lutherie tools, most of my tool collection looks like it was lifted from the pages of the Joiner & Cabinetmaker or any other traditional handwork text. So you will find the standard issue hand planes, chisels, marking and measuring tools, and a nest of saws. Only the bending iron, purfling cutter, and fret files might give any indication that I am predominantly a luthier rather than a cabinetmaker.

A set of letter blocks, but what sort of printing machine do they fit?

In contrast the collection I recently acquired makes for a varied, and fascinating subject. The vast collection of router bits, in addition to the Shopsmith machine, allows me to infer that the previous owner was a predominantly machine based woodworker. He was also, I think, a metal worker. There is an endless supply of round and square steel stock, milling bits, and numerous metal working tools including some wonderful knurling tools and parallel jawed pliers. But some of the crates hold more unexpected wonders. A bag of small brass letter blocks for use in a printing machine, a pyrography machine, and a 3” sweep brace, were some of the more unexpected finds buried in one of the crates. It is hard to picture this craftsman; was he accomplished in many crafts, or was he a spirited dabber? What as his work like? Whatever the reality, the sheer breadth of his interests leaves me wishing that I could have talked to him about his craft.

This Anarchist’s Tool Chest houses all of my tools.

By sheer coincidence, my excursion into workshop archaeology came just after I had finished reading Virtuoso, the recent book on the tool cabinet of American piano builder H.O Studley (published by Lost Art Press, 2015). And my experiences of trying to piece together a picture of an unknown craftsman reminds me of the work that Don Williams undertook in researching Virtuoso (although my workshop archaeology is on a far less grand scale). Like my mysterious craftsman, we know little about Studley, but in Virtuoso Williams‘s forensic examination of Studley’s iconic tool cabinet, and the tools it contains, together with solid historic research builds a picture of the elusive craftsman who built and used the cabinet. It is a fascinating read, both for the intricacies of the tool cabinet, which in many ways resembles a 3D puzzle, and also for the light it sheds on a craftsman who has been obscured by the tool cabinet he clearly intended to be his legacy and the expression of his craft. As a book examining the very highest levels of craftsmanship, and workshop archaeology, Virtuoso comes highly recommended.

Very few of us ever achieve the enormous level of skill that H.O Studley possessed. But most of us will create at least one piece of work which will outlive us. And like the owner of my recent acquisitions, we will leave behind a tool collection that others will pick through and make use of, continuing the heritage of woodwork. I find this very comforting; the idea that my tools will continue to be used to create long after I am gone. At my old martial arts club there was a tradition of never washing your belt, because the dirt it picked up represented years of hard won experience and training. I like to think that the patina and wear on each of my tools carries a similar message for the future owners to interpret and decode.

So, the next time you lift the lid on your tool chest (or open the door to your workshop), consider what the contents would say about you and your craft to a future workshop archaeologist.

The important of my Anarchist’s Tool Chest

I have written previously about the personal significance of my tool chest (particularly in issue 224) but in short this is a traditional 18th century English design, recently re-popularised by Christopher Schwarz in his book The Anarchist’s Tool Chest (Lost Art Press, 2011). The chest serves several critical functions in my workshop. It protects my tools from dust and moisture (the two key ingredients of rust) and serves as an excellent vessel for both storing tools and working from. Because of the robust construction (a dovetailed carcase, and mortise and tenon lid, all in inch thick southern yellow pine), the tool chest will also serve as an ark for my tools, ensuring that my children, and their children, can continue to use my tools for many years to come. But most of all, my Anarchist’s Tool Chest is a constant reminder of how I want to approach my craft. It is a reminder of the countless craftsmen who came before me and used the same traditional tools, techniques (and yes, form of tool chest) as I do, and of those that will follow the same path long after I am gone. 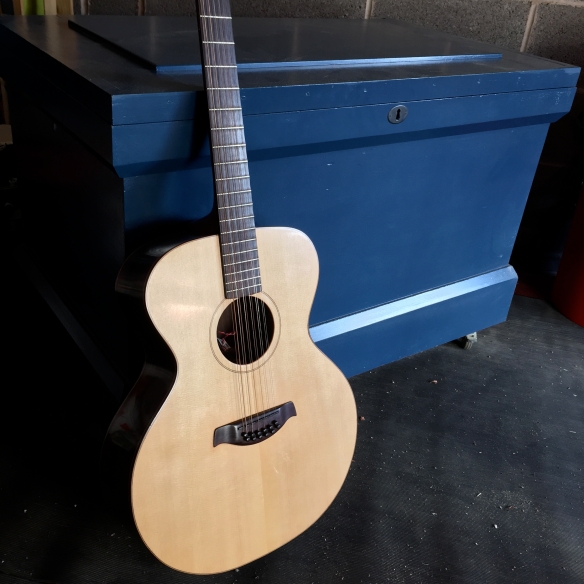 This guitar, and my tool chest, are all that is needed to tell the story of my craft.