The following is adapted from an article I wrote for Furniture & Cabinetmaking Magazine (published in issue 234).

A great deal of the luthier’s craft is spent working with stock far thinner than that commonly used by most furniture makers, and gluing up thin panels of say, 5mm thick, requires a different approach (which I wrote about in issue 230). Of course, the use of thin stock is not exclusive to the lutherie workshop, and here I will describe how you can build this jig for your own workshop.

In essence the gluing jig is a slotted deck with rails on two sides (each of these sides has a rail above and below the deck). The rails on one side are fixed, while the other set moves to accommodate the width of the panel being glued. Clamping force is provided by hardwood wedges that are inserted in the slots through the deck between the panel being glued and the fixed rails, forcing the panel against the moveable rails.

For this build you will need: 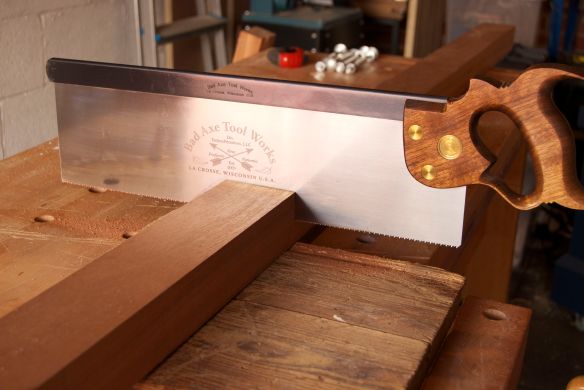 Cutting the rails to size

The first step is to mark and cut all four rails to length, as we will use these for slotting the deck. I used a 16” tenon saw by Bad Axe Tool Works, filed with their special “hybrid” filing.

The deck contains two sets of slots; the first set runs from the edge of the deck, between the fixed rails, and extend beyond the fixed rails. It is this set of slots into which the wedges will slide. The second set numbers only four slots, and run across the deck to allow the bolts holding the moveable rails to slide up to the edge of the panel being glued. 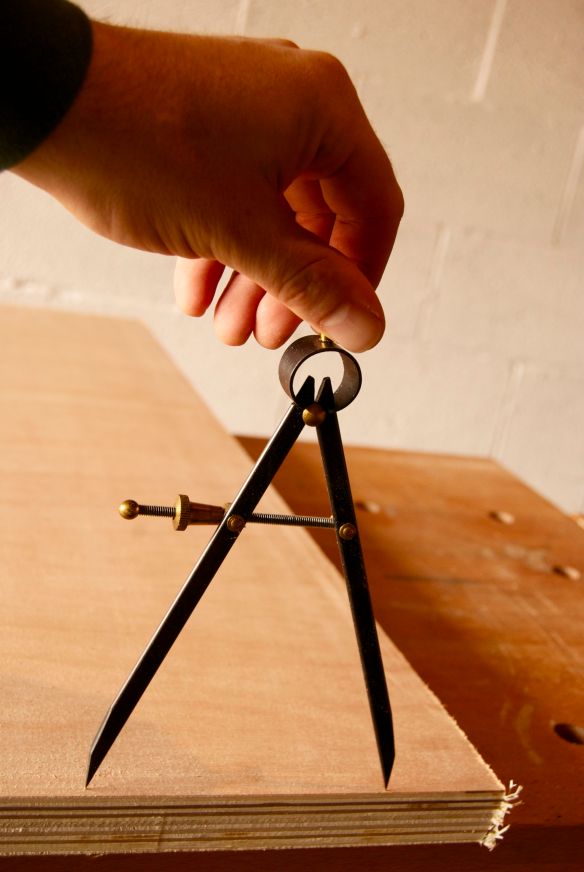 Laying out the position of the slots

Lay out the spacing for the short slots. I prefer to avoid maths wherever possible, so laid out my slots using dividers. I left 50mm at each end of the deck and adjusted my dividers to give eight slots down that edge. Next, clamp one of the rails across the deck to provide a stop for the router – these slots need to extend 40mm beyond the inner edge of the fixed rails. Using a 25mm diameter router cutter, and your router fixed with an edge guide, cut all eight slots.

Next rout the four slots for the moveable rail fixture, using the same 25mm diameter cutter. Again, two of the rails can be clamped across the work piece to provide consistent end stops – these slots start 110mm from the far end of the deck, and finish 405mm from the fixed rails. I offset these slots from the slots on the opposite side of the deck to avoid weakening the plywood, and increased the width of the two middle slots to allow for additional adjustment to allow setting the moveable rails at an angle for gluing irregularly shaped panels. 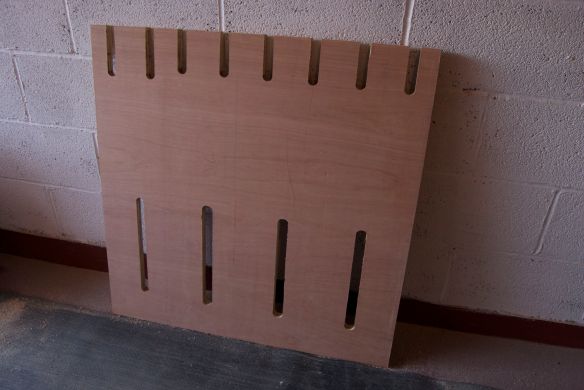 Before the fixed rails can be glued to the deck they need to be drilled for two bolts. These bolts help to locate the rail during glue-up so that nothing slips, and also provides additional security when hammering in the wedges. Drill the holes for the bolts, locating these to also drill through the plywood and avoid going through one of the slots you previously routed (mine ended up 125mm from each end). The bolts have a square section on the underside of the head, and are threaded through the bottom fixed rail with the nut and washer on the top of the jig. Cut square mortises in the underside of the bottom rail to accept the square section for both bolts. To mark out the mortise, insert the bolt and give it a sharp tap with a mallet, this will leave a crisp line round the edge of the mortise. Then chisel the waste until the bolt sits in the hole correctly. Apply your preferred brand of glue to the two fixed rails (I used Gorilla Glue), insert the bolts, and clamp up to cure. 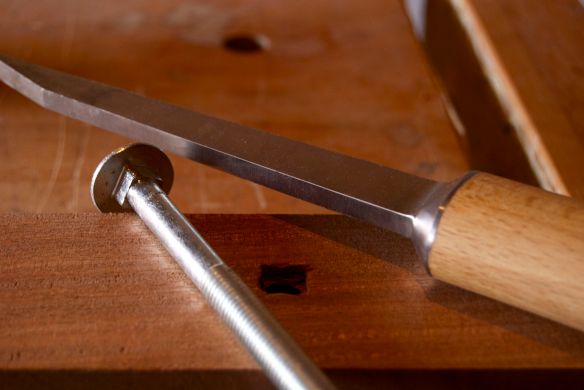 Cutting the recess for the square head of the bolts 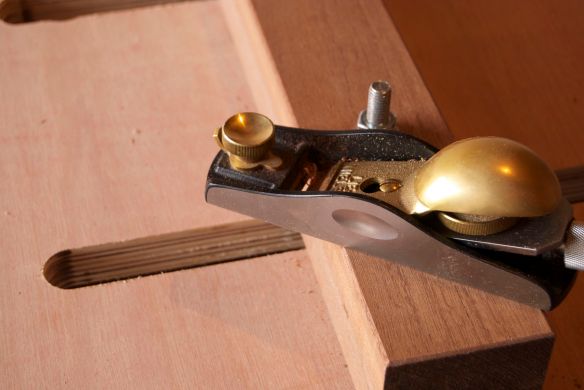 Chamfering the edges of the rails for comfort

Once the fixed rails have been broken out of the clamps, thread the bolts through the moveable rails so that the nut and washers are on the top of the jig, and fit the rails to the deck. These rails should slide smoothly across the deck with the bolts loosened, but should be rock solid once the bolts are tightened up. Chamfer the edges of both top rails with a block plane, and call the deck done. 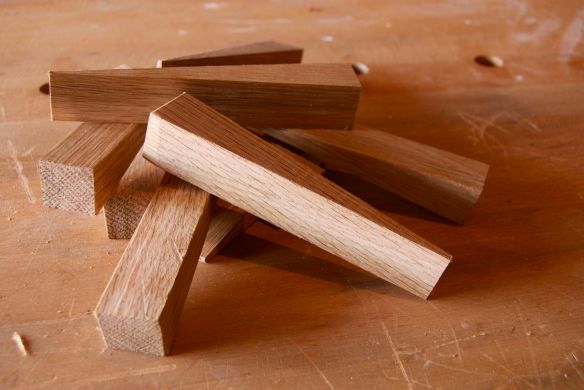 All that remains is to cut the wedges. It is best if the wedges are not all identical, so cut these by eye with a handsaw (I used my 16” tenon saw). Use a block plane to clean up any sharp edges, paying particular attention to the fragile thin end of the wedge. I also gave the deck a coat of shellac, partly because this makes cleaning up any glue squeeze out easier, and also I find that it raises the grain in the plywood which makes for a grippier surface.

The jig is now ready to be pressed into use, and I will post a separate entry showing how I use it for gluing up the soundboard for the parlour guitar.