In my last post I wrote about dovetailing the three sliding trays for the tool chest. Once the glue had cured on the dovetailed assemblies the next task was to fit the floors to each of the trays. As instructed in the Anarchist’s Tool Chest, I used 6mm thick oak for the drawer bottoms as this is strong (allowing thin stock to be used) and hardwearing. Fitting the bottoms became quite interesting however, as the nice chap at the saw mill was having a bit of a nightmare when he cut my stock to size and left it 100mm under length (no refunds provided for saw mill mistakes either, as it turns out) so I had to improvise a little. 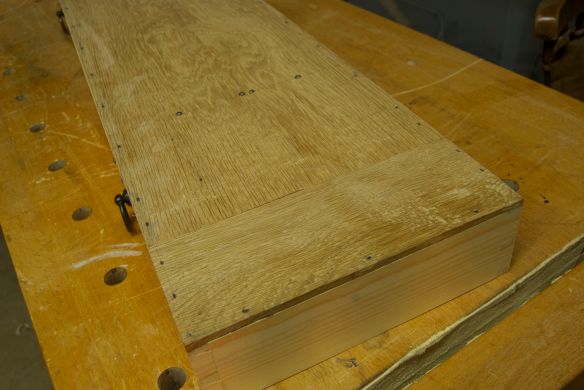 My solution was to fix the (too short) floor boards from one end of each tray with 2d headless cut brads, the positions of which were stepped off with dividers and pilot holes drilled in the usual way. A small bead of Gorilla glue along the bottom edge of the tray side also held the bottoms in place. The 100mm shortfall at the end of the tray was filled with a further piece of oak with the grain running front to back (rather than end to end as with the long floor boards), also fixed in place with 2d headless cut brads and Gorilla Glue. 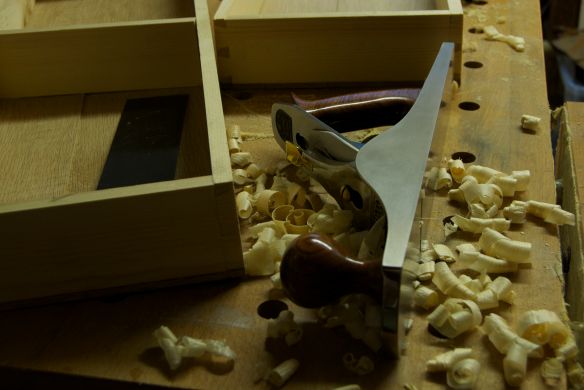 To prevent the unsecured ends of the long floor boards from flapping about or snapping under the weight of the tray’s contents, and also to divide the space up usefully, I then fitted some pine offcuts roughly 9″ from each end of the two shallow trays. These were nailed to the front and back of the trays as well as the floor boards, and with the dividers fitted the floor boards were rock solid, 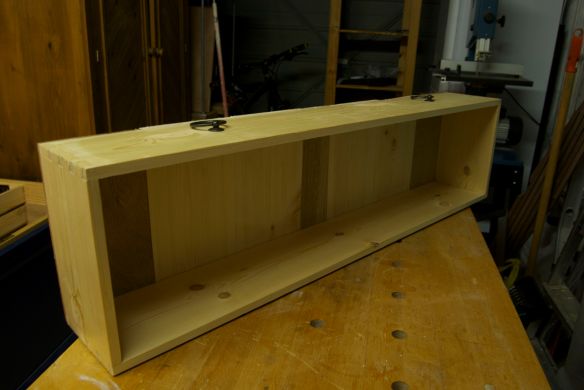 The deeper tray will hold heavier items, and so I took a different approach with to ensure that the floor was suitably robust. At each end I used the same 6mm thick oak, with grain running front to back, while the rest of the floor was fitted out using 12mm pine, each piece roughly 100mm wide, also running front to back. The middle piece of flooring was 12mm thick oak to add an element of visual interest. A whisker of day light was left between each floor board to allow for seasonal movement. 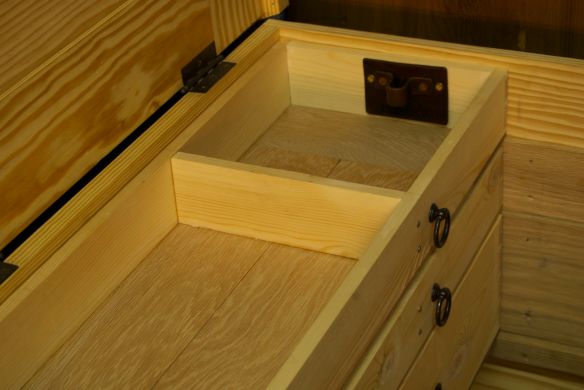 With the floors in place I was able to give the trays a final fitting to the interior of the chest. Two of the three fitted perfectly without any adjustment, and the third required just a minor trim with a block plane before it would fit properly. The next step was to fit the drawer pulls, and these were placed by eye on the top tray until I found a position I was happy with. With the pulls fitted to the top tray, I laid out the pulls on the other two trays so that they would be directly in line with those on the top tray (taking into account the reduction in width for each subsequent tray). I also fitted to the top tray a Saddle Sling from Sterling Tool Works to hold my dovetail marker. 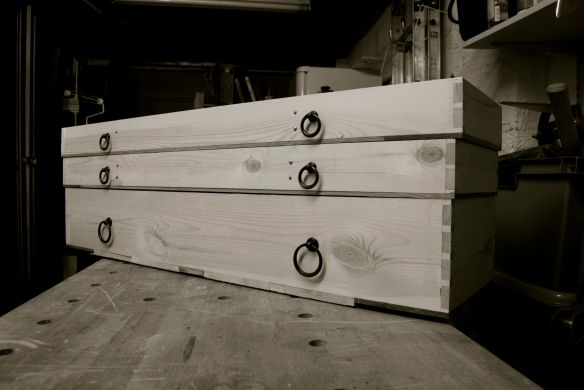 The final step was to lubricate the tray sides to ensure that they continue to move smoothly without too much wear or friction. I mixed up some soft paste wax from bees wax, white spirit, and turps (to a recipe very kindly provided by Derek Jones of New English Workshop). This was my first experience mixing up a wax from scratch, but following Derek’s instructions it proved to be a very straight forward process, and the trays move smoothly and virtually silently.

2 thoughts on “(I like) Drawer Bottoms (and I cannot lie)”